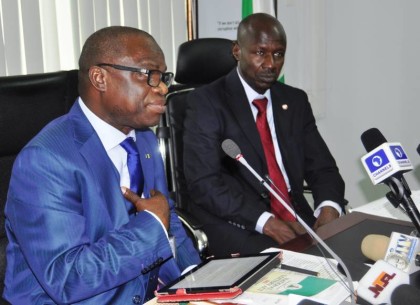 The Director General of National Lottery Regulatory Commission, NLRC, Adolphus Joe Ekpe, has again reiterated his firm commitment to collaborate with the Economic and Financial Crimes Commission, EFCC, in tackling lottery scam and economic crimes in the country.

He said the synergy became imperative as both agencies are strategic to the success of the anti corruption campaign which is one of the cardinal focus of the present administration.
Ekpe gave this hint on Tuesday, April 19, 2016 during a maiden joint press briefing with the Acting Chairman, EFCC, Ibrahim Magu held at the EFCC’s Head Office, Abuja.

The NLRC had on March 17, 2015, signed a Memorandum of Understanding, MoU, with the EFCC on ways to effectively combat fraud in the lottery sector in Nigeria.

Under the agreement, the Commission will make available its operatives with respect to enforcement of the National Lottery Act, in the area of training, investigation and prosecution, so as to have a joint team to clean up the system for the good of the country.

The NLRC boss commended Magu for his effort so far in ridding the country of corruption. He stated that the collaboration between the NLRC and the EFCC is aimed at training the staff of NLRC in the area of investigation and prosecution of lottery crimes.

He said that the briefing is to reaffirm the commitment of the two agencies in sanitizing the lottery Commission to ensure accountability required by its Act.

“The Commission has embarked on mapping of all lottery agents and sub agents to regulate lottery operation across the country. We will also activate a newly developed NLRC SMS Transaction Monitoring And Archival Platform (STRAMAP) which has the potential to ensure live monitoring of lottery transaction online real time”, Ekpe said.

He further thanked the EFCC for its support so far especially in the area of training and also urged the press to support the Commission’s effort by sensitizing the public on the fight against lottery crimes.

Responding, Magu thanked the DG for his efforts so far in combating illegal lottery operation and assured him of the unwavering support of the Commission.
He further stated that the success of the fight against crime is dependent on the synergies of agencies such as this.
In attendance were management members of NLRC and the EFCC.