Towards Rebuilding $6 billion Worth of Boko Haram Damages 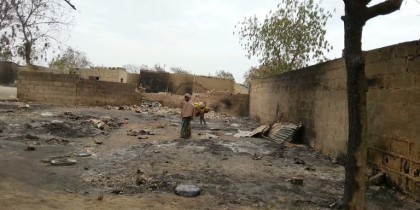 Borno State Governor, Kashim Shettima, on Saturday arrived Istanbul, Turkey, where he is scheduled to address International donors and humanitarian organizations with focus on attracting partnerships to compliment ongoing efforts by the President Muhammadu Buhari led administration and the Borno State Government towards rebuilding communities across the 27 local government areas which have suffered destructions worth six billion dollars (equivalent to about two trillion naira) based on a Post Insurgency Recovery and Peace Building Assessment Report on Borno recently validated by the World Bank as disclosed by office the Nigerian Vice President last month.

Special Adviser on Communications and Strategy, Malam Isa Gusau who emailed a statement from Istanbul, said Governor Shettima is to serve as a panelist in a side event on the Lake Chad (which includes Borno) with the theme: “How to end suffering in the Lake Chad basin: A dialogue between local communities and the aid community” with participants expected from different countries around the world.

The Director-General of the International Committee of the Red Cross and Red Crescent, Mr Yves Daccord and the Executive Director of the United Nations World Food Programme, Ertharin Cousin are to join Governor Shettima as panelists.

In a concept note, the United Nations describes problems caused by the Boko Haram insurgency around the Lake Chad (which is largely involves Borno State) as one of the most neglected major crisis in the world. “In the Lake Chad Basin, Boko Haram’s brutal cycle of violence has uprooted 2.4 million people from their homes and livelihoods. Civilians, particularly women and children bear the brunt of the attacks.

Africa’s most recent and fastest growing displacement crisis is driven by deep-set converging challenges which have translated into record of people requiring urgent assistance.

While significant efforts have taken place in the past months to scale up response and there has been an increase in donor contributions, the Lake Chad crisis remains overlooked and neglected.

This side event will highlight the plight of one of the world’s most neglected crisis, and advocate for immediate response to the most urgent needs, as well as for a sustainable solution” the UN said.

Governor Shettima was accompanied by a patron of the Red Cross in Borno State and elder statesman, Bulama Mali Gubio is also a panelist representing host community.