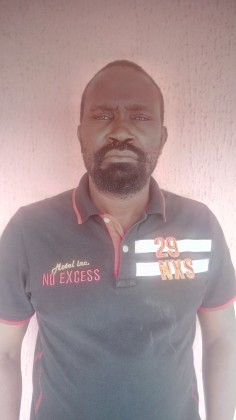 The Economic and Financial Crimes Commission, EFCC, Wednesday May 1, 2016 arraigned one Imo Efiong Akpan before Justice Ifiok Ukana of the State High Court sitting in Uyo, Akwa Ibom State on a 2- count charge bordering on stealing and obtaining money by false pretense to the tune of Forty Million Naira.The petitioner alleged that the suspect, Barrister Akpan sold a filing station (Tripple Tower Petroleum Resources) to him for Twenty million Naira, which he paid in two installments. He further stated that after several months, he found out that the owner of the property whom the suspect claimed to be his uncle was not aware of the sale and that documents presented by the suspect were forged.Count one reads,” that you Imo Efiong Akpan sometime in May 2012, at Uyo within the Uyo Judicial Division, with intent to defraud, obtained the total sum of N20,000,000.00 (Twenty Million Naira) from Kufre Nelson by falsely representing yourself to him as an agent of Tripple Tower Petroleum Resources for the sale of its Filling Station Located at Idu Urwan Road, Uyo, which representation you knew to be false thereby committed an offence of obtaining money by false pretense contrary to Section 1 (3) of the Advance Fee Fraud and Other Related Offences Act No. 14 of 2006”. Count two reads, “that you Imo Efiong Akpan sometimes in May 2012, at Uyo within the Uyo Judicial Division, with intent to defraud, fraudulently converted to your own use the sum of N20, 000,000.00 (Twenty Million Naira), property of Mr. Kufre Nelson thereby committed an offence Stealing contrary to Section 405 of the Criminal Code, Cap 38, Vol.2, Laws of Akwa Ibom State of Nigeria, 2000”.He pleaded not guilty to the charge when it was read to him.In view of his plea, counsel to EFCC, Usman Shehu, urged the court to fix a date for the commencement of trial and to remand the accused person in prison custody.However, Justice Ukana adjourned the matter to 6 June, 2016 for hearing of the bail application and ordered that the defendant be remanded in EFCC custody.
Wilson Uwujaren
Head, Media & Publicity