Looted Public Funds In US Would Soon Repatriate To Nigeria – Kerry 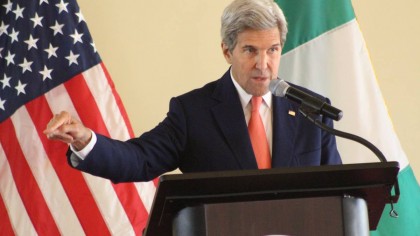 John Kerry
US Secretary of States

NAN, Abuja: The U.S Secretary of State, John Kerry, made the promise on Wednesday at a meeting with Civil Societies Organisation (CSOs) in Abuja before his departure to Saudi Arabia.

The U.S. government would soon repatriate looted funds to Nigeria and would continue to assist in the fight against corruption.

The repatriation process had been delayed because of some technicalities which were being sorted out.

Before his departure former US ambassador to Nigeria Entwistle expressed his country’s readiness to stand hand-in-hand with Nigeria and provide any assistance needed to jointly combat corruption.

The CSOs, on the platform of Anti-corruption Non-Governmental Organisations (NGOs) met with Kerry at the U.S embassy in Abuja.

At the meeting the CSOs demanded that U.S should expedite the repatriation of looted funds to Nigeria.

According to Mumuni, the CSOs also urged the U.S. Government to lend more support to President Mohammadu Buhari’s Administration in the fight against corruption.

In the same vein Kemi Okenyodo, Executive Director Partners West Africa Nigeria, said the group was at the embassy to discuss with Kerry on the efforts of government in the fight against corruption in Nigeria.