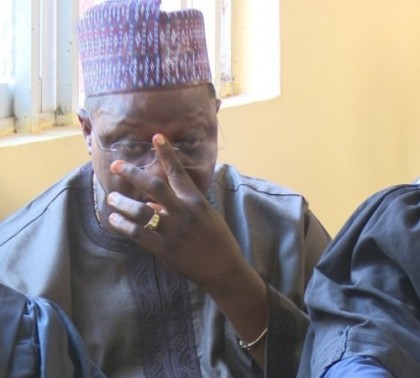 Former Plateau State Governor, Joshua Chibi Dariye’s N1.6b trial continued on Monday, October 17, 2016 before Justice Adebukola Banjoko of the Federal Capital Territory (FCT) High Court, Gudu, Abuja, with a defence witness, Paul Datugum, a staff in the Office of the Accountant-General, Plateau State Ministry of Finance, failing to substantiate an alleged raid by operatives of the Economic and Financial Crimes Commission, EFCC, on the Ministry in 2005.

Datugum, who claimed to have worked in the State Ministry of Education between 2000 and 2006, told the court that “my predecessor in the Central Cash Unit of the Office of the Accountant-General, the late Bala Kwafur, did not hand over any document to me because EFCC staff had invaded and taken away all the documents in the Ministry of Finance by the time I was posted there.”

However, under cross-examination by the counsel to the EFCC, Rotimi Jacobs, SAN, Datugum, who admitted that the Ministry of Education building was some meters from the Ministry of Finance, said he did not see the particular documents that were allegedly carted away by operatives of the EFCC.

“You remember you said in your statement that you spent days looking for the documents, without being able to identify them,” Jacobs added.

Joshua Chibi Dariye was born July 27, 1957, elected and assumed office as the Governor of Plateau State May 29, 1999, on the platform of the People’s Democratic Party (PDP). He was re-elected for another 4year term starting in May 2003, and was impeached in November 2006. In April 2011 he was elected Senator for Plateau Central on the Labour Party platform.

Dariye last month Dariye decamped to the governing party, the APC in a letter address to senate President and read on the floor of the Nigerian Senate by the senate President Bukola Saraki.