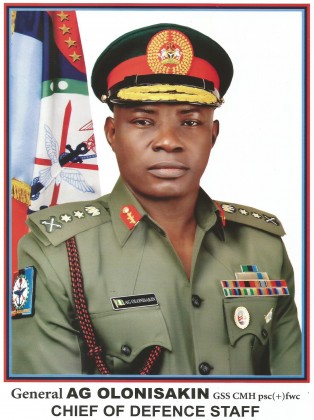 The Chief of Defence Staff (CDS), General Abayomi Gabriel Olonisakin has called on world military leaders to unite together and pull their resources to fight global common enemy terrorism which is now an albatross to the existence of humanity.

General Olonisakin made this call during meetings of Committee of World Chiefs of Defence Staff in Washington DC recently.

According to General Olonisakin “terrorism does not only hinder the development of nations but is fast threatening the corporate existence of human race.”

He cited the cruelty of the Boko Haram terrorists in Nigeria which kill, maim and destroy property in unimaginable proportion as an example while condemning in very strong terms terrorist.

He added, “the activities of Boko Haram and other terrorist groups elsewhere if not contained through the instrumentality of joint forces and information sharing may snowball into a catastrophic dimension.”

General Olonisakin, therefore, urged world military leaders to do everything possible to assist one another in the fight against terrorism saying, “terrorism being an asymmetric warfare requires a wider spectrum of cooperation with other nations, since insurgency and terrorism transverse beyond borders.”

While in the Washington DC, General Olonisakin used the opportunity to seek for more enhanced bilateral and multilateral defense cooperation with the Chiefs of Defence Staff of USA, Britain, and France.

The Committee of World Chiefs of Defence Staff later endorsed the holding of regular meetings with the aim of reappraising issues that may require urgent attention and channeling of resources to address global terrorism. The CDS has since returned to the country.