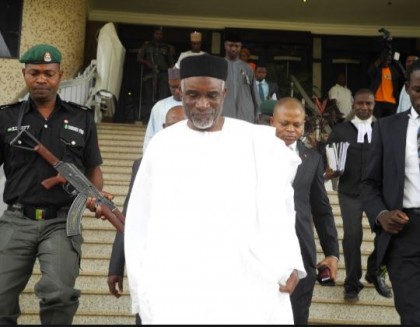 A Federal High Court, Maitama on February 20, 2017 admitted 26 documents as exhibits in the trial of a former governor of Adamawa State, Murtala Nyako, who along with his son, Senator Abdul-Aziz Nyako, Abubakar Aliyu and Zulkifikk Abba, are standing trial for a N29 billion fraud.
The Economic and Financial Crimes Commission, EFCC, is charging them with a 37-count charge bordering on criminal conspiracy, stealing, abuse of office and money laundering.
They are alleged to have used five companies – Blue Opal Nigeria limited, Serore Farms & Extension Limited, Pagoda Fortunes Limited, Towers Assets Management Limited and Crust Energy Limited, among other companies to commit the fraud.
Justice Okon Abang had at the last sitting of January 25, 2017 adjourned to today due to the absence of third prosecution witness, Olabode Farinuola, a staff of Zenith Bank, through whom the documents were supposed to have been presented in court.
At the resumed sitting, prosecution counsel, Rotimi Jacobs, SAN, told the court that Farinuola had resigned from the bank and had traveled out of the country to the United States.
“This is the new development, after we made inquiry with Zenith Bank and so they have provided us with another witness,” he said, urging the court to “set aside Farinuola’s evidence”.
No objections were raised by Kanu Agabi, SAN, counsel to Nyako, his son and Serore Farms & Extension Limited; Y.C Maikyau, SAN, counsel to Abubakar Aliyu; Ibrahim Isiyaku, counsel to Zulkifikk Abba and Towers Assets; counsel to Blue Opal Nigeria limited, Olumide Olujimi; and counsel to Crust Energy Limited, O. A. Dada.
Justice Okon Abang, thus ruled that “since prosecution witness 3, PW3 is not in court to complete his evidence in-chief, it is hereby set aside and expunged”.
Ugwu Remigius, compliance officer with the Maitama branch of Zenith Bank, who replaced Farinuola thereafter took the witness box.
While being led in evidence by Jacobs, he said, “I worked with Farinuola at the compliance department we printed and compiled the documents as regards to the request of the EFCC for the statement of accounts, account opening packages and certificate of identification with regards to companies they were investigating.”
He thereafter identified the documents linked to the defendants, which the EFCC alleged to have been used to perpetrate the fraud.
The defence raised no objections to the admissibility of the documents.
Justice Okon, while adjourning to February 21, 2017 for “continuation of trial”, admitted the documents in evidence and marked them as exhibits C1-C63, D1-D274, E1-E60, F1-F235, G1-G154, H1-H42, I1-I203, J1-J35, K1-K16, L1-55, LB1-53, M1-38, N1-37, O1-34, P1-66, Q1-34, R1-28, S1-54, T1-27, V1-33, W1-60, X1-28, Y1-40, Z1-31, ZA1-250 and