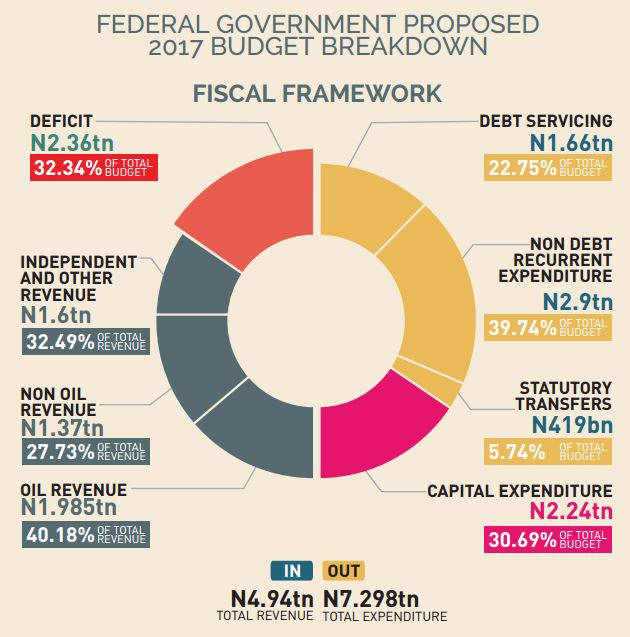 BudgiT Office, Abuja: Nigeria’s 2017 budget plans suggest that its strategy out of this economic downturn and slow growth is to resort to heavier spending.

Expenditure on infrastructure, security and social services are noted as needed to help upend the cycle of decline and reflate the economy for accelerated growth.

By and large, the Nigerian government seems to be focused on following the tenets of the “Keynesian” school of thought, which prioritises fiscal injection in stabilising economies.

The federal government (FG) is projecting a N4.94tn revenue uptake in the fiscal year 2017, a 27.98% increase over 2016 levels of N3.86tn. This is hinged on institutional optimism that the price of crude will stay above $42.5 per barrel and the expectation is that the oil sector will ultimately remit N1.985tn into the FG’s revenue pool. The oil sector’s pre-eminence is unquestionable in the 2017 budget proposal; increasingly under security and market pressures, it is nevertheless still projected to account for 40.18% of revenues in the fiscal year.

Proposing a total expenditure of N2.24tn on capital items, the FG shows a strong focus on infrastructural projects including rail, road construction and power.

The take for Recurrent Expenditure is a proposed N5.058tn in 2017. Noteworthy here is that Debt servicing and contributions into the sinking funds account amount to N1.84tn.

The FG will be committing N1.66tn to debt servicing, with N1.49tn going into domestic debt, which stood at N10.61tn as at June, 2016. A total of N175.9bn will be expended in servicing foreign debt, while the balance of N177.5bn will be pushed into sinking funds, to retire maturing debt obligations.

Oil prices are in the interim expected to trade above $45 per barrel for the greater part of 2017, so the Nigerian government’s projections of $42.5 per barrel which underlines revenue projections of N1.985tn, looks to be within limits that show a cognisance of the dynamic of its operating markets.

However, with the new US policy on energy, Nigeria may well brace its economy for a flattening out of prices as the year progress.