Monetary Policy Committee Met Against The Backdrop of Persistent Uncertainty in the Global Economy, 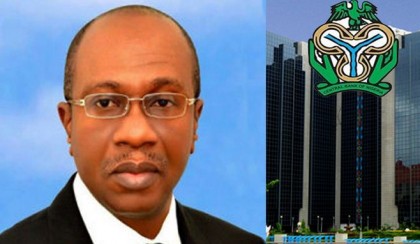 1 CENTRAL BANK OF NIGERIA COMMUNIQUÉ NO 112 OF THE MONETARY POLICY COMMITTEE MEETING OF 20TH AND 21ST MARCH 2017 1.0. Background The Monetary Policy Committee met on the 20th and 21st of March, 2017, against the backdrop of persistent uncertainty in the global economy,

stemming from economic and socio-political developments around the world. On the domestic front, while the Q4 2016 GDP figure was better than the last two consecutive quarters, the economy remained in recession with inflationary pressures continuing unabated. These adverse external and domestic conditions

continued to complicate the policy environment. In attendance at the meeting were 10 members of the Committee. The Committee assessed the global and domestic economic and financial environments in Q1 2017 as well as the outlook for the medium-term. 2 External Developments The global economy witnessed greater

momentum in Q4 2016, facilitated by gains in both developed, emerging markets and developing economies which propelled global GDP growth to 2.7 per cent year-on-year in Q4, 2016, a 0.2 percentage point improvement over Q3 2016. In spite of this improvement, the external environment continued to be plagued by

political, economic and financial market uncertainties, with the defining issues being: Brexit, growing protectionist and anti-globalization sentiments, divergent monetary policies of the advanced economies’ central banks and volatile commodity price movements. The protectionist stance of the new U.S. administration could

impact negatively on global trade and economic recovery. 3 The MPC noted the slip in oil prices against the backdrop of fears of a supply glut, fuelled by increased activities in US Shale oil production, which threatens to undermine the rebalancing effects of the last OPEC decision to cut output. The Committee also noted the 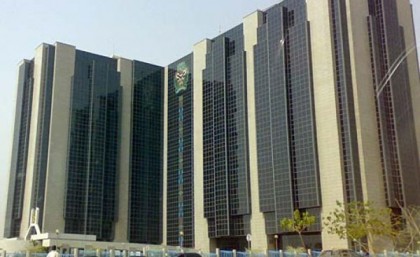 increase in the target range of the US Fed funds rate at the last meeting of the FOMC and the potential spillover effects on global capital flows and interest rates, especially given the still tepid global economic activity and weak demand. Challenges in the emerging markets and developing economies persist, as they struggle

with strong headwinds from low commodity prices, rising inflation, currency volatility, receding real income and capital reversals. Overall, the Committee noted the dampening effects of economic stagnation and uncertainty on global trade and 4 investment. In spite of these constraints, however, the IMF estimates that the

global economy would witness a slight improvement in growth from 3.1 per cent in 2016 to 3.4 per cent in 2017. Global inflation continued its moderate but steady rise against the backdrop of improved oil prices and depreciated currencies in several emerging markets. Amongst the major advanced economies, the U.S Fed 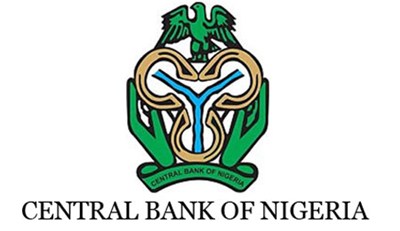 maintained its tightening stance, with a further upward adjustment1 in March 2017. Meanwhile the Bank of Japan (BOJ), Bank of England and the European Central Bank, maintained the soft policy stance at their most recent meetings. 1 The Federal Reserve again raised its benchmark Federal Fund rate by 25 basis points

in March 2017, to a range of 0.75 to 1.00 per cent, having raised rates by the same margin in December, 2016, and also provided indication of further rate hikes in 2017 5 Domestic Output Developments Data released by the National Bureau of Statistics (NBS) in February 2017 showed that the economy contracted marginally

per cent in Q4 2016 from the 4.54 per cent recorded in Q3 2016. The Committee remains of the conviction that fiscal policy remained the most potent panacea to most of the key negative undercurrents i.e. stunted economic activity, heightened unemployment and high inflation. In spite of the recent moderate recovery in oil 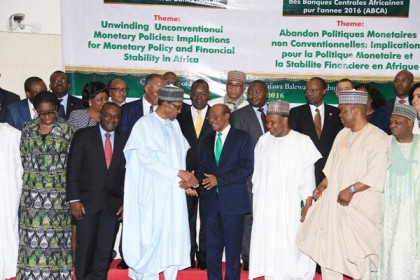 prices, the Committee approached developments in commodity 6 prices cautiously. It noted that the era of high oil prices was over, thus making diversification away from oil more imperative today than ever. Developments in Money and Prices The committee noted that money supply (M2) contracted by 5.73 per cent in February

to government contracted at an annualized rate of 49.74 per cent, representing 82.86 per cent below its programmed target of 33.12 per cent. In effect, all the major monetary aggregates contracted by end-February 7 and underperformed their programmed provisional benchmarks for fiscal 2017. Headline inflation (year-on-year), however, declined for the first time in 15 months, dropping by 0.94 percentage point to 17.78 per cent in February, from the 18.72 per cent recorded in

recorded in January, 2017. The Committee, similarly, observed a continuous upward trend in the month-on-month inflation rate in February, 8 having slightly moderated between December 2016 and January, 2017. It noted the sustenance of the structural factors mounting pressures on consumer prices, such as the high cost of power and energy, transport and production factors, as well as rising prices of imports. Nonetheless, the Committee remains optimistic that the adopted 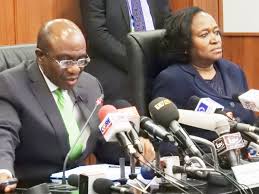 policy stance and other ancillary measures directed at improving the agricultural and other relevant sectors of the economy would combine to restart growth and drive down prices in the short to medium-term. Money market interest rates moved in tandem with the level of liquidity in the banking system. Rates were relatively

Capitalization (MC) decreased by 2.68 per cent from N8.97 to N8.73 trillion during the same period. Relative to end-December 2016, the capital market indices, fell by 3.12 and 3.03 per cent, respectively, reflecting the challenges still confronting the economy. Total foreign exchange inflows through the CBN decreased by 8.87

per cent in February, 2017 compared with the 10 previous month, as foreign exchange market receipts were significantly lower. Total outflows, also declined by 7.32 per cent during the same period. The Committee noted that the average naira exchange rate remained stable at the interbank segment of the foreign exchange

market in the review period. 2.0. Overall Outlook and Risks Available data and forecasts of key economic variables as well as the newly released Federal Government’s Economic Recovery and Growth Plan (ERGP), indicate prospects of output recovery in 2017. The Committee expects that the implementation of this

plan, the new foreign exchange policy as well as the current effort by the Federal Government to restore peace in the Niger Delta region would help revive economic growth and stabilize prices. 11 The Committee identified the downside risks to this outlook to include the possibility of a slower-than-expected rate of global

economic activity, tight monetary policy stance by the U.S. Fed, resulting in strengthening U.S dollar, and low oil prices. 3.0. The Considerations of the Committee The Committee re-evaluated the implications for Nigeria of the continuing global uncertainties as reflected in the unfolding protectionist posture of the United

States and some European countries; sustenance of the OPEC-Russian agreement to cut oil production beyond July 2017; sluggish global recovery and the strengthening U.S. dollar. The Committee also evaluated other challenges confronting the domestic economy and the opportunities for achieving price stability,

members welcomed the improved implementation of the foreign exchange policy that resulted in naira’s recent appreciation. Similarly, the Committee expressed satisfaction on the release of the Economic Recovery and Growth Plan, and urged its speedy implementation with clear timelines and deliverables. On the strength

of these developments, the Committee felt inclined to maintain a hold on all policy parameters. Nevertheless, the Committee noted the arguments for tightening policy which remained strong and persuasive. These include: the real policy rate which remains negative, 13 upper reference band for inflation remains substantially

breached and elevated demand pressure in the foreign exchange market. The reality of sustained pressures on prices (consumer prices and the naira exchange rate) cannot be ignored, given the Bank’s primary mandate of price stability. It noted that the moderation in inflation in February was due to base effect as other

parameters, particularly; month-on-month CPI continued to rise. However, tightening at this time would portray the Bank as being insensitive to growth. Also, the deposit money banks may easily reprice their assets which would undermine financial stability. Besides, the Committee noted the need to create binding restrictions on growth in narrow money and structural liquidity and the imperative of macroeconomic stability to achieving price stability conducive to growth. 14 The

Committee also considered the arguments for loosening the stance of monetary policy, noting its desirability in stimulating aggregate demand if credit increased with lower rates of interest. It noted the arguments that loose monetary policy was capable of delivering cheaper credit, making it more attractive for Nigerians to acquire assets, thus increasing wealth and stimulating aggregate spending and confidence by economic agents, which would eventually lead to lower

Non-performing loans in the system. However, the counterfactual arguments against loosening was anchored on the upward trending month-on-month inflation and its impact on the exchange rate. Loosening would thus worsen the already negative real interest rate, widen the interest rate spread and reverse the positive

outlook for the current account position. 15 On outlook for financial stability, the Committee noted that the banking sector was becoming less resilient as a result of the adverse macroeconomic environment. Nevertheless, the MPC reiterated its resolve to continue to pursue financial system stability. To this end, the Committee

enjoined the Management of the Bank to work with DMBs to promptly address rising NPLs, declining asset quality, credit concentration and high foreign exchange exposures. The Committee also noted the benefits of loosening at this time which will be in line with the needs of fiscal policy to restart growth. The MPC, however

, noted that loosening would exacerbate inflationary pressures, worsen the exchange rate and further pull the real interest rate into negative territory. Since interest rates are sticky downwards, 16 loosening may not necessarily transmit into lower retail lending rates. The Committee noted the consecutive positive contribution of agriculture to GDP in Q4 2016, a development partly traceable to the Bank’s interventions in the sector. The Committee remains optimistic that, if properly

implemented, the newly released Economic Recovery and Growth Plan (ERGP) coupled with innovative, growth-stimulating sectoral policies would help fast track economic recovery. 4.0. The Committee’s Decisions The Committee, in consideration of the headwinds in the domestic economy and the uncertainties in the global

Retain the Asymmetric corridor at +200 and -500 basis points around the MPR Thank you for listening. Godwin I. Emefiele Governor, Central Bank of Nigeria 21st