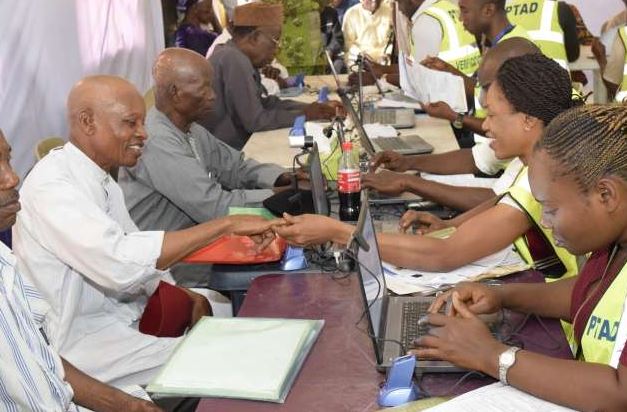 PTAD: Why We Embarked On A Nationwide Verification

The  Executive Secretary of  the directorate, Mrs Sharon Ikeazor,  said this  on Wednesday  in Ado Ekiti  while monitoring the exercise.

She said that the Federal Government was desirous of paying its pensioners as at when due, adding that the exercise  was vital to allow for update of  records.

Ikeazor warned the pensioners against paying money to anyone during the exercise, saying they were only to present their vital documents for verification.

She also gave an assurance that  there was zero tolerance for corruption in the handling of pensioners’ funds across the country.

The directorate, she said, currently has an anti- corruption unit  being operated  in collaboration with the ICPC to  ensure there were no sharp practices.

Ikeazor commended  the  staff deployed for the exercise for the courteous manner they had been relating with the  pensioners, especially the aged.

“All we are trying to do as a body is to make  a departure from the ways things are done in the past and to let the pensioners know that their services  to their fatherland is not in vain.

“As you can see, we provided chairs and tents, including refreshments for them, as against the old practice where you find pensioners queuing for hours under the sun,” she said.

A  member  of the state chapter of the Nigerian Union of Pensioners,  Mr Babajide Olasehinde, commended the Federal Government over  the exercise, saying  it was smooth.

He, however,  called for the  quick disbursement of the fund  recently approved by the Acting President,  Prof. Yemi Osinbajo, for the settlement of outstanding pensions and liabilities.

NAN reports that  the week-long exercise,  which began on Monday at the Ado Ekiti centre, would  end  on Friday.