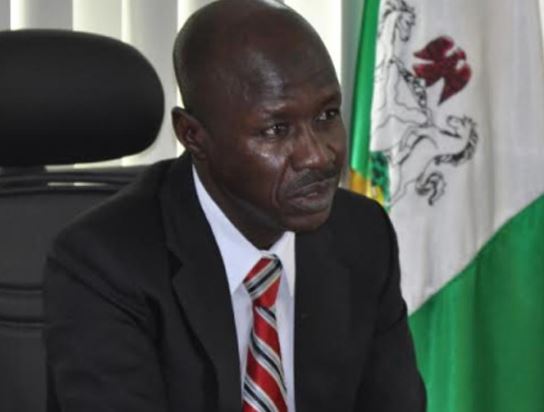 The acting Chairman of Economic and Financial Crimes Commission, EFCC, Ibrahim Magu, has lamented non-compliance with regulations on money laundering and other related offences by some banks and financial institutions.

Magu, who described money laundering as a threat to developing and developed countries, expressed regret that some banks had not been reporting suspicious transactions in line with statutory regulations.

Speaking today at a workshop on “Money laundering and Combating the Financing of Terrorism” organized by the Chartered Institute of Bankers of Nigeria, CIB, in Lagos, Magu, who was represented by Garba Dugum, Head of Operations, Lagoa Zonal Office, condemned the activities of some Bureau De Change, BDCs, operators, saying that “ Most of them are not licenced and usually do not keep records. You can imagine when $2million was carried cash and given to an unregistered BDC man on the street.”

The EFCC boss also stated that some bank officials were in the habit of opening accounts for government officials even after the introduction of the Treasury Single Account, TSA, thereby allowing government funds to be diverted.

He added: “There are several bank accounts that are not linked to BVN and are still active.

“Some micro-finance banks indulge in collecting huge sums of cash for a short fixed term deposit with attractive high interests.”

Magu, who said the Commission had since the beginning of the year recorded several convictions in corruption, money laundering, oil pipeline vandalism and related offences, further stated that coordinated national and international steps must be taken to combat the menace of money laundering.

He also advocated increased sensitization and awareness campaigns within the government and private business sector as a counter- measure against money laundering.

Magu added: “ Application of penalties ranging from fine to revocation of licence by regulators shall send a strong signal to erring banks and other reporting organizations
“Regular review of the legal framework to move with time and accommodate new emerging trends of money laundering is key.”

The organisers presented a plague to Magu in appreciation of his relentless efforts towards stamping out corruption and economic crimes from the country.