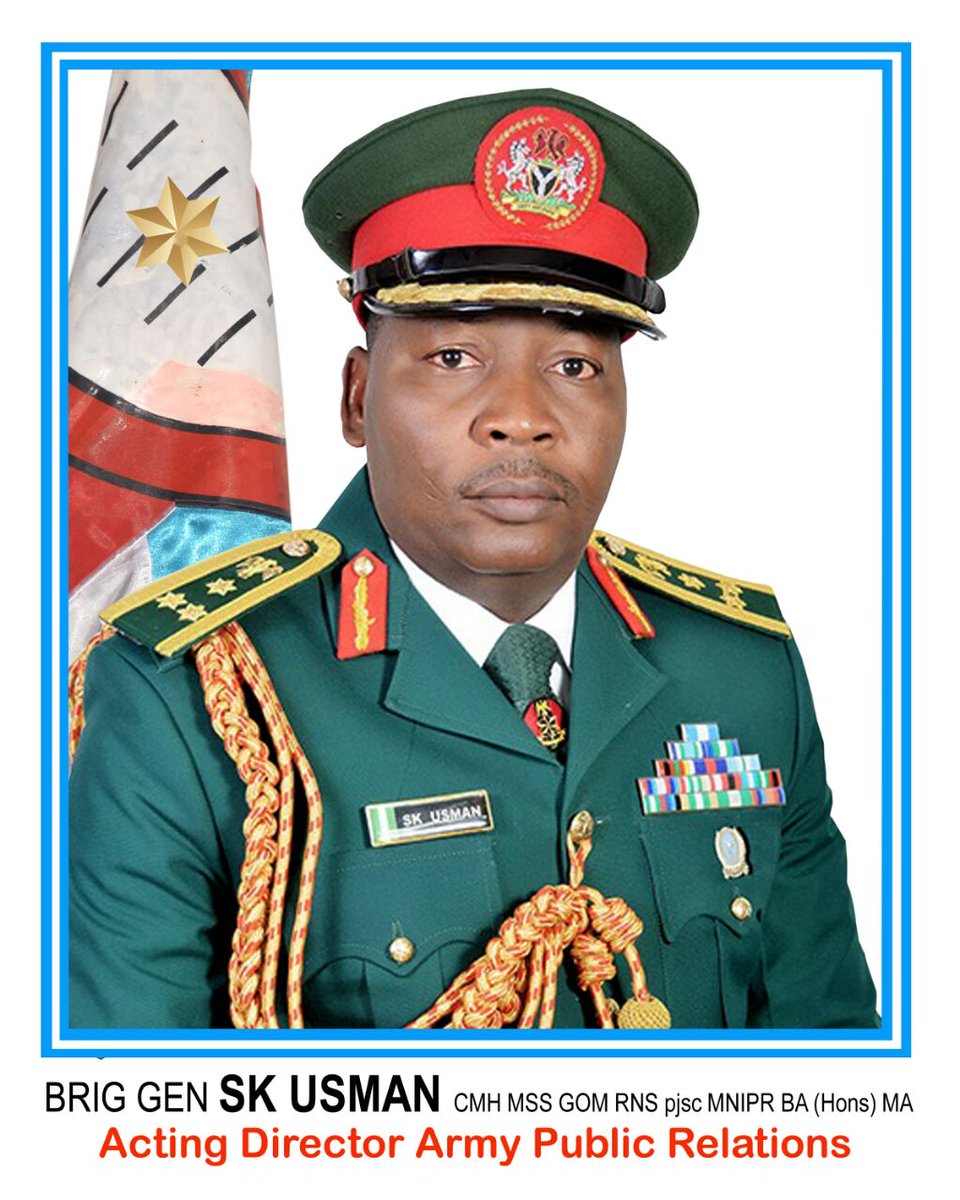 RE: EXPOSED: CORRUPTION IN THE ARMY – HOW A WOUNDED SOLDIER WAS ABANDONED BY THE NIGERIAN ARMY AND HAD HIS SALARY AND ALLOWANCES STOPPED

The Nigerian Army is not a conscript Army. Interested persons voluntarily enlist to serve and must abide by the rules that governed the organization. It has standard and established procedure for treatment of wounded officers and soldiers from the scene of any incident or theatre of war. This could start from first aid to evacuation to Regimental Aid Post, Field Medical Services/Ambulance, up to Divisional Medical Service and Hospital, as well as Nigerian Army Reference Hospitals, University Teaching Hospitals and other Specialist Hospitals within Nigeria. More serious cases are further evacuated abroad for due and necessary management they deserve. The case of Private Abdulrauf Aliyu is not different from that of any other gallant officers and soldiers of the Nigerian Army that were wounded in action. Furthermore, Commanders have no direct say or access to their personnel pay and Allowances. The hasty generalization of labelling commanders corrupt is unfounded, nauseating and libelous.

For the avoidance of doubt, Private Abdulrauf Aliyu was posted to 1 Division Garrison on 18th December 2013 after 6 months military training at Depot Nigerian Army, Zaria, Kaduna State, for military duties. On 11th December 2015, Private Abdulrauf Aliyu was nominated to beef up 158 Task Force Battalion at the Nigerian Army School of Infantry (NASI), Jaji. The unit was later deployed to the North East. Private Abdulrauf Aliyu’s unit was unfortunately attacked on the 18th April 2016 at Kareto by Boko Haram, during the attack, he sustained abdomen injury which after First Aid treatment he was evacuated to 7 Division Hospital and Medical Services for treatment.

The soldier was later transferred to the University of Maiduguri Teaching Hospital for expert review and care. He has not been seen on several visits to both 7 Division Hospital and Medical Services and University of Maiduguri Teaching Hospital. All efforts to trace the whereabouts of Private Abdulrauf Aliyu proved abortive as he failed to return to either 158 Task Force Battalion nor 1 Division Garrison unit till this moment. It is important to note that he was neither discharged by any of the aforementioned hospitals, nor was he granted official pass by any Commander. Consequent upon this, his unit had no option other than to initiate Absent Without Leave (AWOL) and disciplinary procedures against him leading to stoppage of his pay and allowance in accordance with extant laws and procedures of the Nigerian Army. He was declared AWOL on 24th June 2016 and has spent a total of 183 days as at the time the Board of Inquiry (BOI) on his continued absence was set up. Therefore, BOI recommended that the soldier be Struck Off Strength (SOS), which was done on 16th August 2016.

From the foregoing, this is a clear case of a deserter from the Nigerian Army trying to run a campaign of calumny against the Nigerian Army on Social Media through willing accomplice as Mr. Ahmed Idris. Sections 59-63 of the Armed Forces Act Cap A20 Laws of the Federation of Nigeria 2004 are very clear about Absent Without Leave and Desertion in the Nigerian Army and indeed, Armed Forces of Nigeria. In addition, it is obvious that the Facebook post by Mr. Ahmed Idris lacks merit and is replete with half-truths and misinformation intended to whip public sentiments, as well as malign the Nigerian Army in a clear case of criminal misconduct by a soldier. Therefore Mr. Ahmed Idris, is strongly advised to please always eschew rushing to malign persons and organizations without proper investigation. You should allow whatever sentiment or malice you harbour against anybody or the Nigerian Army not to becloud your sense of judgements. You should stop misleading the public through unfounded and baseless allegations.

As it is now the soldier in question is a deserter who, if seen, should be apprehended and handed over to the nearest military unit or police station. To that extent, your write up is malicious and baselessly uninformed. You are inadvertently either ignorantly or deliberately promoting and encouraging acts of indiscipline and cowardice amongst troops and most importantly, corruption which you professed to fight against. The general public should ignore this campaign of calumny by Mr. Ahmed Idris aimed at tarnishing the good reputation of the Nigerian Army. Additionally, every Nigerian is duty bound to apprehend or report any officer or soldier that unlawfully abscond from the Service as provided by the Law. Mr. Ahmed Idris should surrender the deserter soldier or he will be liable for aiding and abetting desertion of a soldier which is a criminal offence.