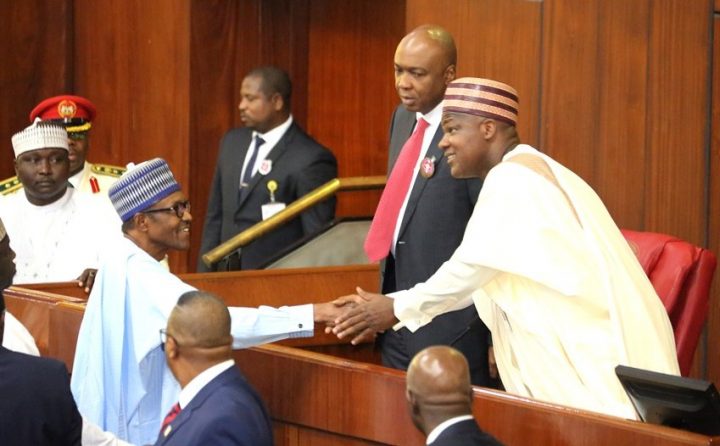 The Speaker, House of Representatives, Yakubu Dogara on Tuesday said that the National Assembly would expedite action toward consideration and passage of the 2018 Appropriation Bill for assent by January 2018.

Dogara said this in Abuja while delivering a vote of thanks at the presentation of the 2018 Budget proposals, estimated at N8.61 trillion to the National Assembly by President Muhammadu Buhari.

The speaker said that the national assembly would swing into action to ensure that the budget was returned to the executive in January for the president’s assent.

While assuring that the national assembly would not delay in working on the proposals, Dogara, however, expressed concern over the level of implementation of the 2017 budget.

He said what agitated the legislators was the prospects of totally abandoning the 2017 Budget and the dire consequences of doing so.

‘‘The questions that must be answered include whether we have effectively enforced 2017 fiscal targets and whether managers have complied with the budget as authorised by the legislature.

‘‘This means that we have to redouble efforts in implementing the 2017 Budget, if we must retire it in January or at the very least, roll over most of the projects in 2017 budget to 2018.

‘‘No need to remind us that fiscal indiscipline is as grievous a problem as corruption which this government is busy eliminating.

‘‘Let me place it on record that the 2018 Budget preparations suffered from inadequate consultations between the Ministries Departments and Agencies (MDAs) and various over-sighting Committees of the National Assembly.

‘‘Consequently, one can only hope and pray that it does not lead to delay in consideration and passage of the Budget,’’ Dogara said.

The Speaker, who commended President Buhari for leading the country out of recession, however, said that many Nigerians were still confronted with economic difficulties.

‘‘Although the recession has technically ended, most Nigerian families are still struggling.

‘‘As a government, we must do all within our powers to hasten their long night of panic and fear into a glorious morning.

‘‘We must never allow this nation to slide into recession, not now, not ever again.

‘‘We cannot, therefore, discountenance policy consistency and synergy between all stakeholders, if we must sustain economic growth and development, going forward,’’ he said.