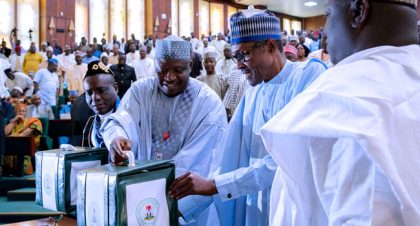 The President, Institute of Fiscal Studies of Nigeria, Mr Godwin Ighedosa, has commended the Federal Government for making non-oil sector as the centre of its revenue projections to execute its plans in 2018.

Ighedosa told the News Agency of Nigeria (NAN) in Abuja that the proposed 2018 budget of N8.612 trillion showed a remarkable shift from over dependence on oil revenue.

“For the first time we are projecting that non-oil revenue is going to overtake oil revenue which obviously is a welcome development because since the 1970s our economy has been largely dependent on oil revenues.

“But the concern right now is where do the government expect to make this much from the non-oil sector?

“I ask this because the major drivers of employment and commercial activities in the country, which is manufacturing and agriculture, are not doing so very well in percentage to GDP.

“Also if it’s on taxes, it’s still unachievable because our tax to GDP ratio remains one of the lowest in the world at about six per cent and I don’t see government raising it so much to make that much difference in 2018.

“So getting the non-oil revenue projects would be a long stretch,” he said.

Ighedosa expressed concern about the government’s oil projections for the year 2018.

He said that the problem from the Niger-Delta region was far from over, thus it would continue to impact negatively on oil production.

“Yes some kind of agreements have been reached between the government and the groups in the Niger-Delta which has helped raise the production level a bit. But it’s not enough.

“However,  2.3 million barrels per day for 2018 is a bit of a stretch because some of the groups in the Niger-Delta are already threatening the government.

“So it may mean that we won’t be able to achieve the revenue projected,” he said.

Ighedosa said the N2.005 trillion budget deficit, which translates to additional borrowings in 2018 fiscal year to finance part of the budget may pose a challenge as any mention of borrowings is perceived negatively by Nigerians.

He, however, said that borrowings for investment was good for the county as it would improve the balance sheet of the Federal Government.

He advised the government to continue to keep a close tab on the ratio of revenue to debt servicing.

President Muhammadu Buhari earlier presented the 2018 budget proposal, tagged “Budget of Consolidation’’, which is expected to reinforce and build on recent accomplishments of the government.

The key parameters of the budget includes a crude oil benchmark price of 45 dollar per barrel, oil production estimate of 2.3 million barrels per day, and exchange rate of N305 per dollar.

The Budget had a projected oil revenue of N2.442 trillion and non-oil projection of N4.165 trillion.