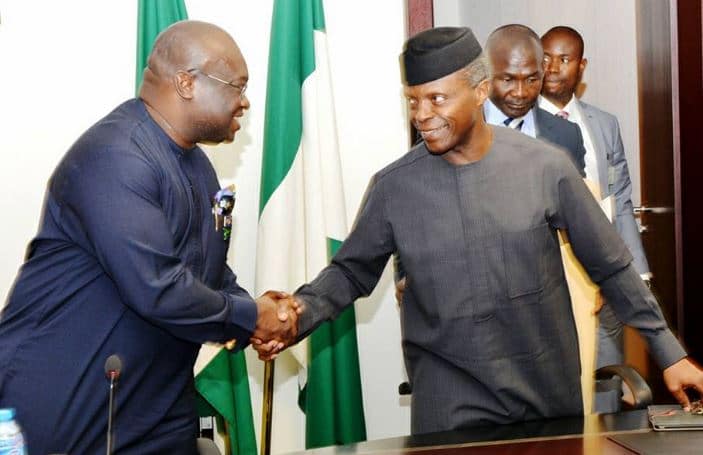 It is the role of government’s regulatory agencies to act as catalysts of beneficial change and to take responsibility for facilitating businesses in the country, according to Acting President Yemi Osinbajo, SAN.

This was stated in a press release issued by the Senior Special Assistant on Media & Publicity to the President Office of the Vice President, Laolu Akande on Tuesday.

“We must see ourselves as agents of some catalytic change, we must take some responsibility to make profound changes possible,” Prof. Osinbajo told regulatory agencies today during a follow-up meeting with the Abia State Governor Okezie Ikpeazu, medium & small scale business stakeholders from the State and some Federal Government regulatory agencies.

The Acting President had visited Aba to flag-off the Presidency’s MSMES Clinics where medium & small scale businesses are brought together in one spot with Federal Government regulatory agencies they interface with.

At the meeting, also attended by the Industry, Trade & Investment Minister-Dr. Okey Enelamah, and the Minister of State in the ministry, Mrs. Aisha Abubakar, the Acting President directed both the National Agency for Food and Drug Administration & Control, NAFDAC and the Standards Organisation of Nigeria, SON, to ascertain specific timelines within which they would be able to grant licenses and approvals required of them by Nigerians and business interests.

Both officials said the timing starts from the day the requests are submitted.

According to the Acting President, regulatory agencies like NAFDAC and SON would be judged by how many people, businesses they are able to support “to achieve the greatest public good.”

He commended the Abia State Governor for his drive, adding that ‘Made in Aba’ products are now acquiring a mark of quality.

Said he: “like I said during my visit to Aba, you can’t have any serious kind of industrialization in this country, without a focus on Aba.”