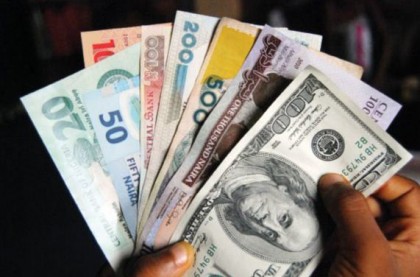 NAN, Abuja; The continuous Central Bank of Nigeria’s (CBN) intervention in foreign exchange (forex), has caused the Naira to hit the dollar again on Wednesday.

The currency traded N400 to a dollar at the black market on Wednesday in Abuja.

The News Agency of Nigeria (NAN) reports that the Naira has also appreciated against the Pound Sterling and Euro rate as it traded at N510 and N415 respectively.

One of the Bureau de Change operators simply known as Tijanni Jos, said that the development had caused operators to lose a lot of money.

According to him, operators did not envisage a consistent slide of the dollar which has caused them to buy at an expensive rate hoping to make returns.

The Nigerian currency also traded at N307.5 at the interbank window.

In other segments of the market, Deposit Money Banks (DMBs) and Travelex, an International Money Transfer Services Operator, sold the Naira at N381 to a dollar.

Mr Godwin Emefiele, Governor of CBN, had on Tuesday, said the apex bank was determined to see the convergence of rates at the foreign exchange market.

Emefiele said that the CBN was optimistic that the rate between the official and parallel market would converge further.

He also said that the bank could sustain the policy, adding that those who doubt the ability of the bank to take decisions and implement it were taking a great risk.
He noted that the nations’ foreign reserves were trending further to 31 billion dollars.

Emefiele had also warned speculators to desist from stocking dollars at home because the CBN intervention would crash the price of dollar, which was already happening.

The CBN had in the last few weeks injected about &1.7 billion into the foreign exchange market.