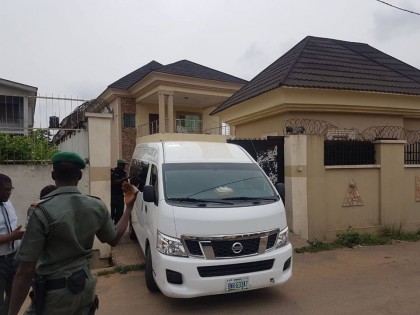 The convicts who were the 4th and 5th defendants amongst other former bankers standing trial in the ongoing CBN N8bn currency mutilation scam opted for a plea bargain hence, they were convicted accordingly. While Toogun, a former staff of the Central Bank of Nigeria, CBN bagged a three-year jail term on counts 15, 17 and 19 respectively to run concurrently with effect from January 1st, 2016 , Afolabi got three years on counts 16, 18 and 19 respectively to also run concurrently with effect from January 1st , 2016. Also Read; EFCC’s Ibrahim Magu Goes To Transparency International On Invitation

The court also ordered that Toogun forfeits to the Federal Government a 3 bedroom apartment situated at Oganla area, off Omi Adio Apata Ibadan, Oyo State, the entire sum in his Access bank and First bank accounts with all the accrued interest as at the date of the conviction.
Afolabi forfeits a 5 bedroom duplex situated at No.8 Fatoke Street, Molete area of Ibadan, a borehole machine/rig, a filing station- Oba Oil Gas Limited located at Liberty Academy area of Ibadan, Oyo State. She shall also forfeit the entire sum in her accounts with First bank, Zenith bank and Guaranty Trust bank respectively.
The convicts alongside other former bankers were arraigned on a 19-count charge bordering on conspiracy, conversion, forgery, and money laundering.

One of the count reads: That you Toogun Kayode Philip and Afolabi Esther Olunike between 2010 and 2012 in Ibadan, within the jurisdiction of this Honourable Court did conspire with Kolawole Babalola, Kehinde Fadokun and Olakunle Sijuwade to convert the sum of N115,000,000.00 (One Hundred and Fifteen Million Naira) which sum was illegally derived from the Central Bank of Nigeria, to wit: by inducing the Central Bank of Nigeria to deliver the said sum to First City Monument Bank Plc as against the actual sum of N58, 331, 900 (Fifty Eight Million, Three Hundred and Thirty One Thousand, Nine Hundred Naira) and you thereby committed an offence contrary to section 17(a) of the Money Laundering (Prohibition) Act. 2004 and punishable under section 14 (1) (a) of the same Act.