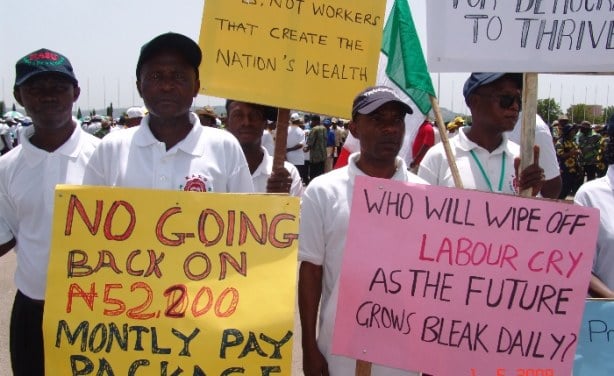 Uche Anichukwu, Abuja: The Deputy President of the Senate, Senator Ike Ekweremadu, has reiterated his call for the implementation of N50,000 minimum wage for Nigerian workers.

Ekweremadu stated this in his goodwill message to workers on May Day.

He said the current N18,000 minimum wage was no longer realistic given the hyperinflation in the country, which he said had made it difficult for overwhelming majority of Nigerian workers to afford the basic needs of life.

“I felicitate with our workers who toil day and night to move the nation forward. But we must collectively show the workers that we care beyond lip service.” Ekweremadu said.

Again DSP said “Importantly, it is high time we raised the minimum wage from N18,000 to N50,000. It does not make sense to preach anti-corruption alone without giving people the opportunity to earn honest and meaningful living.”

Ekweremadu added “The truth is that the take-home pay can no longer take the worker’s home. Where it does, it cannot keep their homes happy because they can hardly afford a bag of rice, let alone pay school fees, and foot other basic bills”.

He said the nation could afford N50,000 minimum wage through proper management of the economy and prudent expenditure by all levels of government.

Ekweremadu wished the workers a happy May Day.