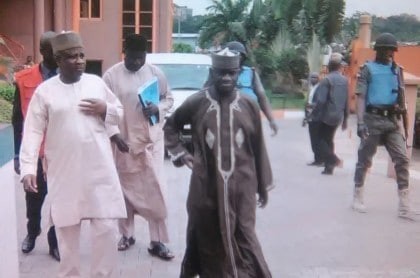 Justice A. S. Umar of the Federal Capital Territory High Court sitting in Maitama, Abuja on Monday, June 19, 2017 admitted in evidence two documents tendered by the Economic and Financial Crimes Commission, EFCC, against a former Chief of Naval Staff, Vice Admiral Usman Jibrin, who is standing trial for alleged corruption.
At the last sitting (June 14), there were arguments and counter arguments between Jibrin’s counsel, Y. C. Maikyau, SAN and counsel to the EFCC, Faruk Abdallah, on whether the documents tendered by the latter against the defendant is admissible or not.
The documents are: the Appropriation Act of the Federal Republic of Nigeria 2013 & 2014 on one hand and the the Appropriation Act of the National Assembly for 2013 and 2014 Laws of the Federal Republic of Nigeria on the other hand.
Miakyau had argued that the documents sought to be tendered by the prosecution did not satisfy the provisions of Section 106 of the Evidence Act, while Abdallah cited Section 122 (1) (2) of the Evidence Act to the effect that the documents tendered are admissible.
In his ruling today, Justice Umar admitted the two documents – a three-volume of Appropriation Act of the Federal Republic of Nigeria for 2013 as exhibit 16 a, b and c, and a three-volume of Appropriation Act of the National Assembly 2014 as exhibit 17 a, b and c.
“I have read carefully and examined the relevant Act, the prosecution has conformed to Section 106 of the Evidence Act”, the judge held.
Justice Umar, thereafter, adjourned to July 13 – 14, 2017 for continuation of trial.
Jibrin is facing trial alongside Rear Admiral Bala Mshelia, Rear Admiral Shehu Ahmadu (all retired) and Habor Bay International Limited on a 4-count charge of criminal conspiracy preferred against them by the EFCC.
The naval chiefs whilst in office allegedly bought a house worth N600million from the account of Naval Engineering Services without budgetary provision.
It was also alleged that, the documentation for transfer of ownership of the property was done such that a private company owned by the family of the first defendant (Vice Admiral Jibrin) became the buyer.