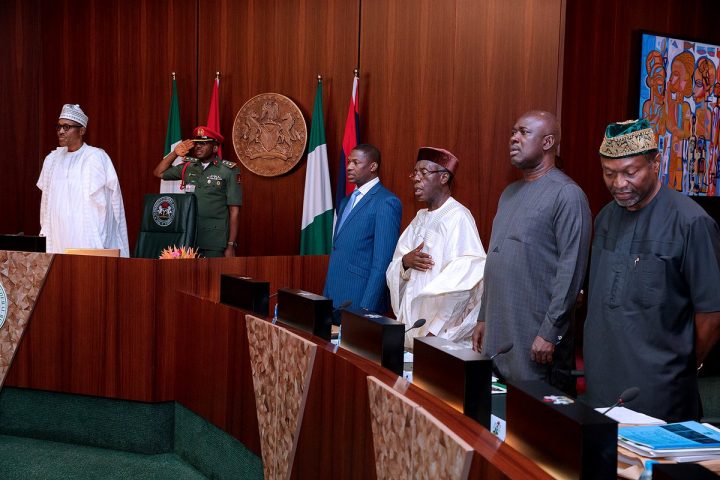 These were the decisions taken by the council at its meeting held on Thursday in Abuja. The Minister of Budget and National Planning, Mr Udoma Udo Udoma, disclosed this when he briefed State House correspondents alongside the Ministers of Power, Works and Housing, Mr Babatunde Fashola and that of Finance, Kemi Adeosun.

Udoma, who declined to disclose the actual figure of the approved 2018 draft budget, said that President Muhammadu Buhari would soon forward the document to the National Assembly for final approval.

So we will be liaising with the National Assembly to agree with the date in which the president will formally submit the budget to them.

It is the president prerogative to submit the budget, submit the proposals and give the details.”

The Minister of Finance, Kemi Adeosun, said that the council approved the establishment of Road Trust Fund (RTF) structure.

According to her, the RTF structure is a PPP initiative that will allow the private sector to get involved in road construction in exchange for tax credit.

“What is unique about the scheme is that it is building on an existing scheme that avails tax credit, but is one company per road and we have found that only two companies have been able to take advantage of it.

“The tax will be recovered over a three-year period. We expect this to mobilize significant capital into road provision across the country.

“The ministry of works will be approving the design and the cost of those roads.

“The Bureau for Public Procurement (BPP) will also provide certificates of no objection to make sure that the cost are reasonable, ministry of works will supervise.” She said.

Fashola said the council approved the construction of 14 kilometres transmission line for the Distribution Company of Nigeria to evacuate the Azura power plant in Edo at the cost of N796.6 million.

He said Azura power plant would be ready in May 2018, while the construction project would be completed within the next seven months.