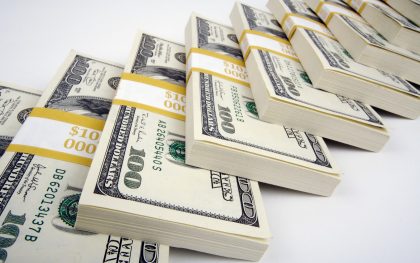 Olalekan Ajayi, ABUJA: The Central Bank of Nigeria (CBN) on Friday, November 24, 2017, injected the sum of $287.89 into the Retail Secondary Market Intervention Sales (SMIS) in continuation of its resolve to guarantee liquidity in the foreign exchange market.

Data received from the CBN on Friday revealed that the figure was in favour of the agricultural, airlines, petroleum products and raw materials and machinery sectors.

The Bank’s Acting Director, Corporate Communications Department, Mr. Isaac Okorafor confirmed the figures, noting that the releases were targeted at sustaining liquidity in the market as well as boosting production and trade.

He reiterated that the Bank remained committed to ensuring liquidity in the inter-bank sector of the market and would continue to intervene in order to drive growth in the economy and guarantee stability in the market.

With Friday’s rates hovering around N359 and N360/$1, Mr. Okorafor, was upbeat that the Bank’s forex intervention had effectively checked speculations around the Naira. He, however, disclosed that the Bank would continue to ensure enforcement through utilization report and market intelligence.

It will be recalled that the CBN earlier in the week on Monday, November 20, 2017, intervened in the inter-bank Foreign Exchange Market to the tune of $210,000,000, comprising of $100million for the wholesale segment and $55 million each for the Small and Medium Enterprises (SMEs) and invisibles segment.

Although the naira maintained its steady rate against major currencies around the globe, exchanging for N360/$1 in the BDC segment of the market on Friday, November 24, 2017, there is growing anticipation that the objective of the CBN to achieve rates convergence might be met before the end of December 2017 through a combination of factors such as Diaspora repatriation of funds and continued accretion to the country’s reserves.