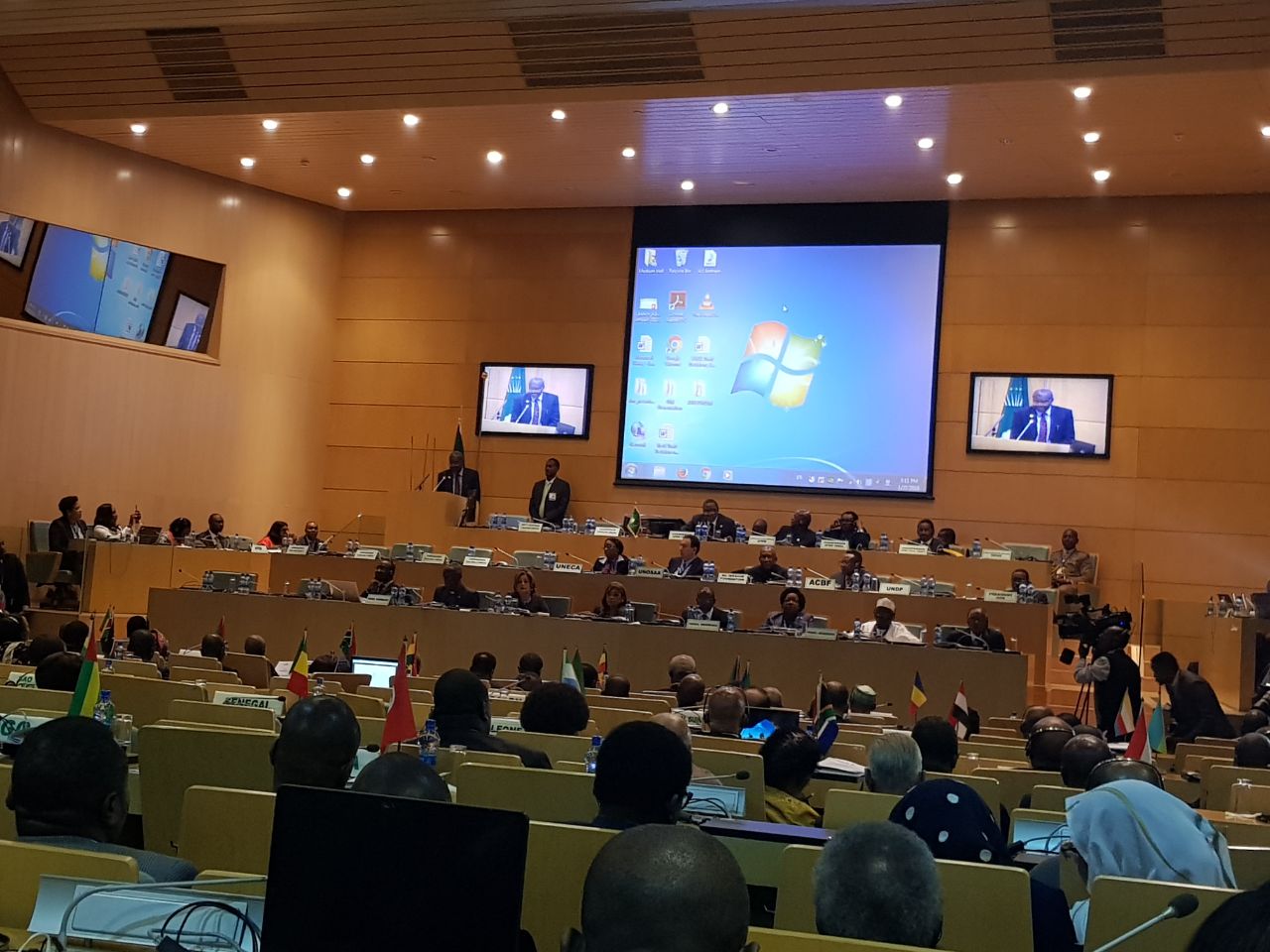 #30thAUSummit: Corruption is One of The Greatest Evils of Our Time – President Buhari

Garba Shehu, Addis Ababa: President Muhammadu Buhari Sunday in Addis Ababa described corruption as one of the greatest evils of our time.

Speaking while formally launching the African Anti-Corruption Year 2018 during the Opening Ceremony of the 30th Ordinary Session of the Assembly of Heads of State and Government of the African Union in the Ethiopian capital, the President declared:

“Corruption is indeed one of the greatest evils of our time. Corruption rewards those who do not play by the rules and also creates a system of distortion and diversion thereby destroying all efforts at constructive, just and fair governance.”

Being the Champion of the theme of the 30th AU Summit, namely, “Winning the Fight against Corruption: A Sustainable Path to Africa’s Transformation,” President Buhari thanked his African colleagues for entrusting him with such a noble responsibility.

He pledged to do his best “to ensure that the anti-corruption agenda will receive the attention it deserves and make the impact we all hope for, during 2018 and beyond.”

The President, who noted that Africa has made some significant strides in enacting legal and policy frameworks such as the African Union Convention on Preventing and Combating Corruption (AUCPCC) to address the vice, said the desired impact had been lacking.

“Fifteen (15) years after the adoption of the African Union Convention, 2018 provides a good starting point to take stock of progress made so far, assess what still needs to be done and devise new strategies to address new corruption challenges,” he said.

According to President Buhari, in spite of sustained economic growth on the continent for the past two decades, “public confidence has been eroded by a focus on short-term priorities and payoffs, propelled by corruption, which too often leaves projects uncompleted and promises unfulfilled.”

He identified other negative effects of corruption as, posing a real threat to national security; eroding the development of a universal culture of good governance, democratic values, gender equality, human rights, justice and the rule of law.

In tackling bribery and corruption, the Nigerian leader said the crucial place of strong institutions cannot be over-emphasised.

“A Judiciary which stands firm against arbitrariness and injustice by the executive is a vital pillar in the anti-corruption fight. As leaders, we must build synergy between the Executive, Legislative and Judicial arms of government in order to entrench good governance, transparency and accountability.

“It is evident that Corruption has a devastating impact on marginalized communities especially the youth, women and children. Corruption breeds unequal societies, renders vulnerable groups prone to human trafficking, as well as recruitment into armed groups and militia. In effect, corruption deprives our young citizens of opportunities to develop meaningful livelihoods.”

He listed his priorities in the campaign against corruption in 2018 to include, organising African Youth Congresses against Corruption “in order to sensitise and engage our youth in the fight against corruption;” mobilising AU member states to implement the extant legal framework on corruption; and canvassing “for the strengthening of the criminal justice system across Africa through exchange of information and sharing best practices in the enforcement of anti-corruption laws.”

The President, who called for the strengthening of the AU Advisory Board on Corruption to make it more proactive, also proposed to enlist the support of parliamentarians, women associations, the media, business community, faith-based groups, the youth, educational institutions and traditional rulers among others in the campaign.

Revealing that Africa loses about 50 billion US dollars annually to corruption, he advocated greater efforts in addressing “the causal relationship between corruption and illicit financial flows.”

Drawing the attention of his colleagues to the “corrosive role that tax havens and secret jurisdictions play in concealing ill-gotten assets,” President Buhari said the continental body “must do more to stop the continuous assault on our economic and financial resources by multinationals in collusion with some of our citizens.”

Observing that tackling corrupt acts and greed required a reorientation of attitudes and perceptions, he declared:

“To win the fight against corruption, we must have a CHANGE of mind set.”

“In Nigeria we have gone far into the implementation of our CHANGE Agenda, which is primarily aimed at fighting corruption.”
President Buhari also reiterated “Nigeria’s abiding commitment to the fight against corruption today, tomorrow and the day after tomorrow.”