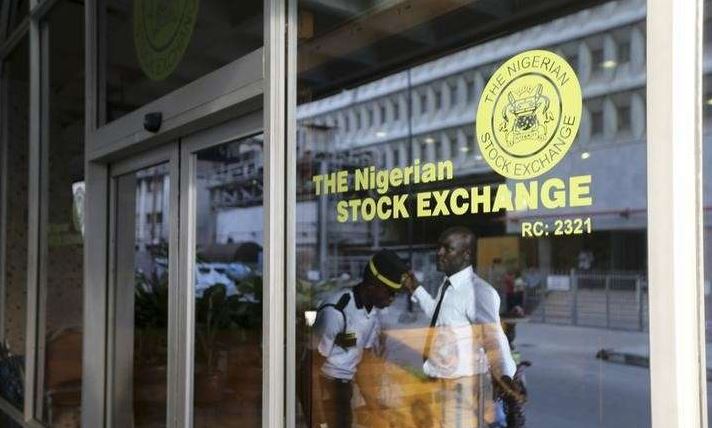 The News Agency of Nigeria (NAN) reports that the turnover and volume grew by 313.46 per cent and 167.36 per cent respectively when compared with figures achieved in January 2017.

NAN also reports that data obtained from NSE indicates that the financial services sector was the most active in volume terms, with a total of 13.09 billion shares worth N107.96 billion in 106,466 deals.

It was trailed by conglomerates with a turnover of 6.63 billion shares valued at N16.54 billion exchanged in 10, 541deals.

Consumer Goods came third with a total of 1.07 billion shares worth N52.05 billion transacted in 27,854 deals

Also, investors net worth on the exchange surged by 15.95 per cent during the period under review due to increased activities ahead of 2018 earnings season. 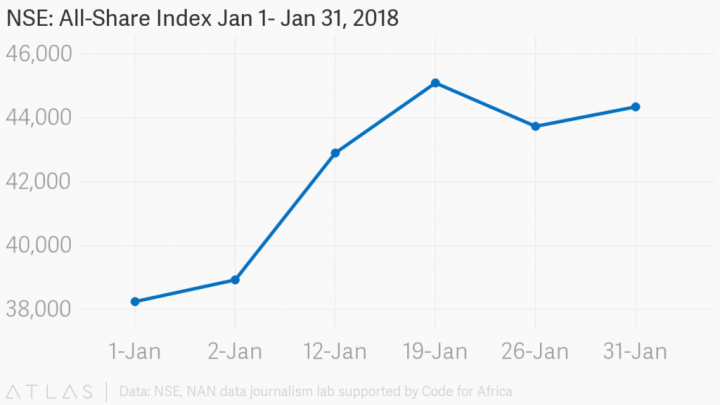 The market value or capitalisation rose by N2. 29 trillion or 16.79 per cent to close at N15.895 trillion when compared with N13.609 trillion recorded at the beginning of the month. 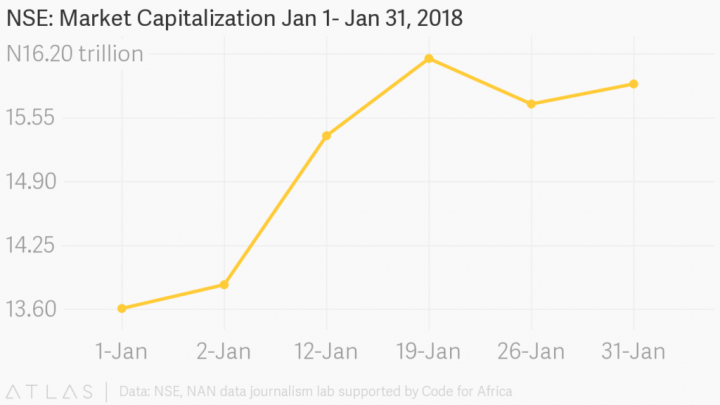 Uwaleke attributed the 15 per cent growth to increased investors confidence in the economy, especially from foreign investors who were excited by the uptrend in international crude oil price.

He said that the bullish trend in the stock market would most likely continue in the month of February barring any external shock from the oil sector which drives the economy.

Uche said that the delay in the passage of the budget could present a drag on the stock market performance in February.

Wusu said the accretion to the country’s external reserves which led to stable foreign exchange condition were some of the basic themes that shaped investors sentiments to the upside during the review period.

He said that investors demonstrated strong interest in both the tier 1 and tier 2 banks.

On market outlook, we are optimistic that the current rally would continue ahead of the earnings seasons,’’ Wusu said.

He said that the market might still witness intermittent profit booking before the release of results.

Wusu, however, said that outlook remained strong and positive in the current month.

The analyst said that the strategy to be adopted by risk tolerant investors ahead of the earnings seasons was to sell during the rally and buy back later.

“This will ensure that sure smart money investors optimise their return,’’ Wusu added.

Mr Ambrose Omordion, the Chief Operating Officer, InvestData Ltd. , said that the 2017 bull-market on the exchange extended to the first month 2018, defying what had come to be known and accepted as the “January effects.

Omordion said that “January effects’’ a coinage that resulted from the fact that the month had repeatedly closed in red as investors were believed to besiege the market for funds to settle pressing demands after the December spending spree.

He attributed the January up-market to renewed investor confidence in Nigeria and the apex bank foreign exchange new policy that brought relative stability in the exchange rate of naira.

Omordion said that the policy attracted foreign inflows into the nation’s capital market.

He added that the impact of the Federal Government reforms such as ease of doing business, gradual slide in the inflation rate, improvement in purchasing managers’ Index (PMI) and Gross Domestic Product (GDP) contributed to the rally.

He said the source of funds brought to the market might cause fluctuations from foreign and domestic institutional investors’ trading in the market.

Omordion, however, said that the up and down movement would continue to create entry and exit opportunities for investors.

He called on investors to invest in fundamentally strong equities with high Dividend Yield and possibility of bonus ahead of the audited financials release season.