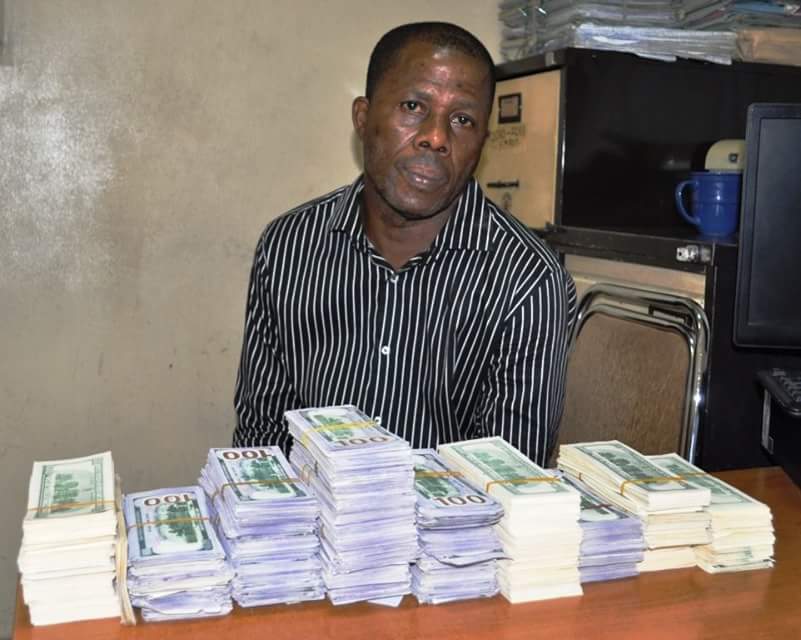 The Economic and Financial Crimes Commission, EFCC, on Saturday, April 7, 2018 arrested a suspected fraudster, one Samson Otuedon, at Masaka, Karu Local Government Area of Nasarawa State for currency counterfeiting. Masaka is few kilometers away from the Federal Capital Territory, Abuja.

Luck ran out on Otuedon, who specialized in counterfeiting foreign currencies, following an intelligence report on Friday, April 6, 2018 on the activities of a syndicate of fraudsters duping unsuspecting victims in Masaka area of the State.

The Commission, upon receipt of the report swung into action by putting the area under surveillance, an action that led to the eventual arrest of the suspect on Saturday.

On arrest, fake foreign currencies totaling over $400,000 (Four Hundred Thousand United States Dollars) were recovered.
While being interrogated, Otuedon admitted that the fake dollars were given to him by other members of his syndicate based in Lagos.

According to him, one of their modus operandi was giving people with genuine dollars part of the fake dollars; that way, it is easily infiltrated into the system.

Otuedon, who confessed to the crime, also admitted that the syndicate use fake dollars for money doubling.

The suspect will be charged to court as soon as investigations are concluded.