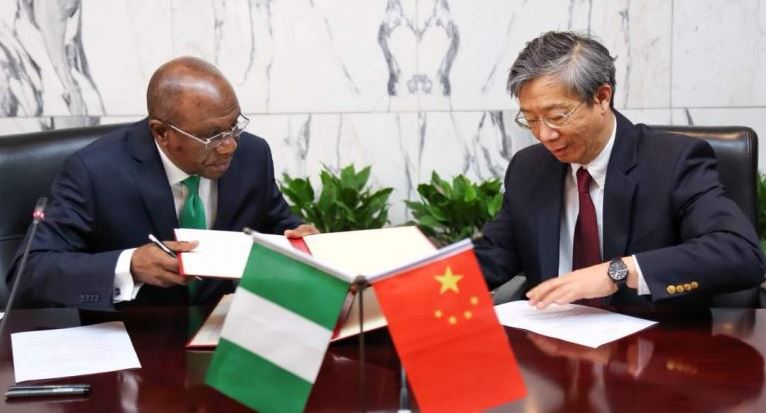 The Central Bank of Nigeria, CBN, has announced the execution of a bilateral currency swap agreement with the Peoples Bank of China, PBoC.

The Governor of the CBN, Mr. Godwin Emefiele, led CBN officials while PBoC Governor, Dr. Yi Gang, led the Chinese team at the official signing ceremony in Beijing, China, a culmination of over two years of negotiations by both Central Banks.

The transaction, which is valued at Renminbi, RMB, 16 billion, or the equivalent of about $2.5bn, is aimed at providing adequate local currency liquidity to Nigerian and Chinese industrialists and other businesses thereby reducing the difficulties encountered in the search for third currencies.

Among other benefits, this agreement will provide Naira liquidity to Chinese businesses and provide RMB liquidity to Nigerian businesses respectively, thereby improving the speed, convenience, and volume of transactions between the two countries.

It will also assist both countries in their foreign exchange reserves management, enhance financial stability and promote broader economic cooperation between the two countries.

Radio Nigeria reports the deal, which is purely an exchange of currencies, will also make it easier for Chinese manufacturers seeking to buy raw materials from Nigeria to obtain enough Naira from banks in China to pay for their imports from Nigeria. Indeed, the deal will protect Nigerian business people from the harsh effects of third currency fluctuations.

Nigeria has become the third African country to have such an agreement in place with the PBoC.