FG to double tax to GDP ratio in 2yrs – Adeosun

The Federal Government is committed to doubling Nigeria’s tax to Gross Domestic Product (GDP) ratio from its current six per cent to 12 per cent by year 2020.

The Minister of Finance, Mrs Kemi Adeosun, said in an interview with the News Agency of Nigeria (NAN) in New York that Nigeria was among the lowest tax-paying country in the world. 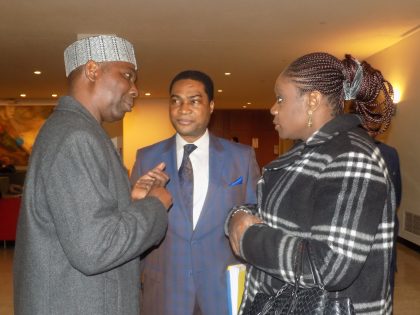 L-R: Nigeria’s Ambassador to the UN, Prof. Tijjani Bande; Spokesman, Nigeria’s Permanent Mission to the UN Bolaji Akinremi; and Minister of Finance Kemi Adeosun in a discussion at the UN Headquarters, New York after Adeosun participated at a tax conference. (Photo Credit: NAN)

The minister had earlier participated on a panel that discussed ‘Revenue Leakages: Illicit Financial Flows’ at the Platform for Collaboration on Tax Conference at the UN Headquarters, New York.

Adeosun said: “We’ve made it the focus to improve our tax to GDP ratio from six per cent where it currently is to move it up into a spare for other African countries.

“Ghana has 15 per cent, South Africa has 24 per cent. Most developed countries have 30 per cent. So Nigeria’s six per cent is very low.

“So we need to correct that and we’ve driven a number of initiatives to do this. We shared that with the panel.

“We shared some of our challenges with the panel and we got some very good advice and support which would be taken back to Nigeria to implement”.

She said, however, that there was still a long way to go adding, “we are not satisfied yet until that figure is significantly moved from where we are in today”.

“As I said, we’ve set ourselves a target, we want to pursue that aggressively and all the revenue generating agencies especially FIRS – Federal Inland Revenue Service.

“States Internal Revenue Service are being equipped to really take on that task and we expect that to yield result,” she said.

The minister had also held a private meeting with the Head of Organisation for Economic Cooperation and Development Global Forum on Exchange of Information, Ms Monica Bhatia.

The meeting focused on Nigeria’s efforts for developing international networks and collaboration with other countries to secure tax payer information. (NAN)