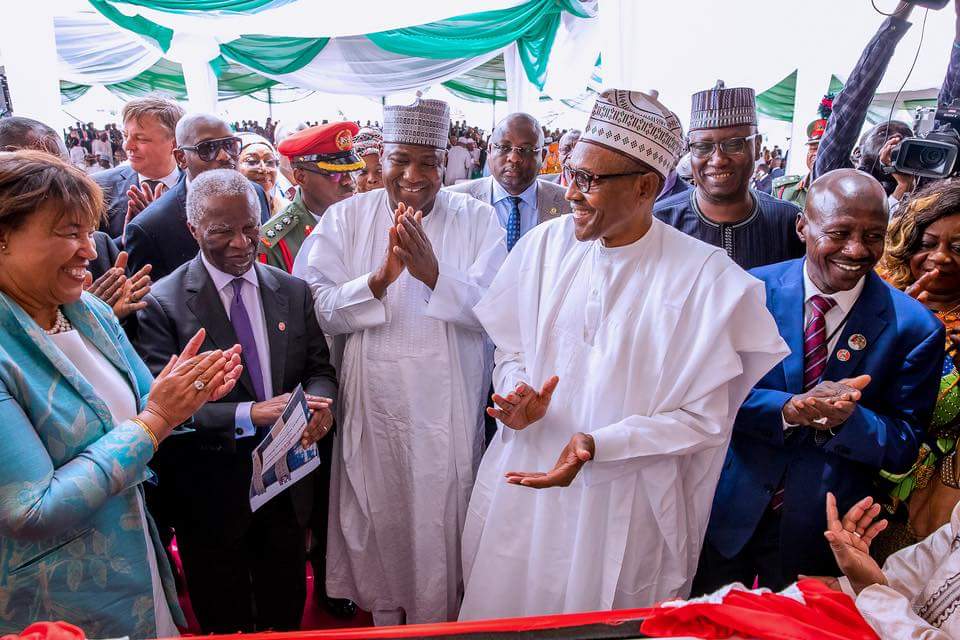 Garba Shehu, Abuja: President Muhammadu Buhari says the nation’s economy is steadily improving, urging Nigerians to remain optimistic as the future of the country is bright.

At a State dinner held Monday, in his honour by the Government of Jigawa State during his two-day working visit, President Buhari called on Nigerians to continue supporting his administration’s well thought-out economic policies.

“The future is bright for Nigeria, as the economy has taken a turn for the better, our foreign reserves are almost twice the level we met, boosting investor confidence and stabilising the Naira, and inflation has declined consecutively for more than a year.

“The Federal government released over N1 trillion for capital projects in 2016 and N1.5 trillion in 2017, figures that are unprecedented in Nigeria’s history,” the President said.

President Buhari listed the ‘Shuwarin overpass’ and ‘Dutse-Shuwarin-Kiyawa’ portion of the Kano – Maiduguri expressway as well as the ‘Dutse-Laraba highway extension as part of areas in which Jigawa State has benefited from the federal government’s commitment to infrastructural rejuvenation.

The President commended Governor Mohammed Badaru Abubakar of Jigawa State for emulating his administration’s commitment to infrastructure development despite severely limited resources available to the State.

The President also lauded the State government for subscribing to the Federal government’s renewable energy master plan by having the largest solar power investment portfolio in the country — the 330 megawatts joint solar power development station situated in Gwiwa Local Government of the State.

Commending the success of the federal government’s Social Intervention Programme in Jigawa State, the President urged states that are yet to access the over N500 billion budgeted for the scheme due to “its stringent eligibility guidelines” to fully take advantage of the programme.

President Buhari equally lauded Governor Badaru’s efforts as the head of the fertilizer supply and distribution programme which has resulted in “unprecedented availability of fertilizer to farmers at zero level.”

The President told the governor: “Your Excellency, you have done well. You deserve the support of your people to keep it up.”