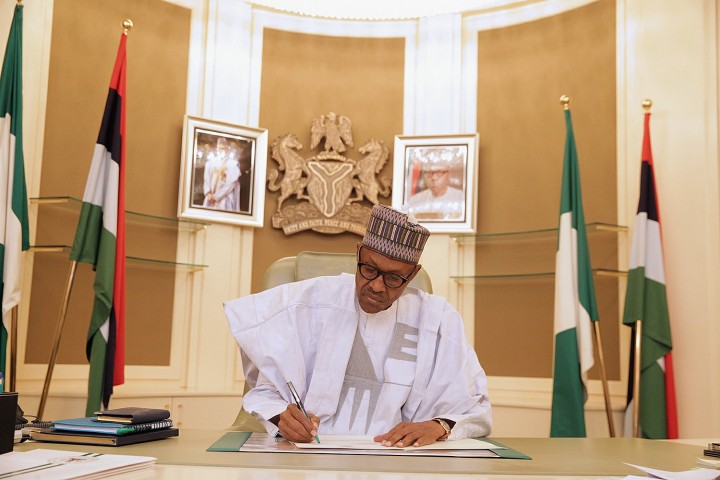 President Muhammadu Buhari has directed that urgent step be taken by all Ministries, Departments and Agencies (MDAs) to activate the nation’s economy following the signing of the 2018 budget into law.
The Senior Special Assistant to the President on National Assembly Matters (Senate), Sen Ita Enang, made the disclosure on Thursday in an interview with the News Agency (NAN) in Abuja.
NAN reports that Buhari had, on June 20, assented to the N9.12 trillion budget with a reservation on the introduction of 6, 403 projects by the lawmakers amounting to N578 billion.
The presidential aide said work had already commenced on the implementation of the budget in order to boost the economy and create jobs.
‘’Mr. President has directed that very immediate and urgent steps be taken so that the economy be activated, employment be created so that the market will be active and people can go around to buy what they need to buy.
‘’Therefore, those are the words of Mr. President. We are not dwelling on any other matter rather than implementation,” he said.
On the controversy over the budget increase by the National Assembly, Enang said the Federal Government is only preoccupied with how to implement the budget.
‘’What you called the dispute on the budget, I want to say that Mr. President made observations from the budget, he did not raise the objection.
‘’Mr. President assented to the budget. The time we are now, we are working on the implementation of the budget. We are working on steps to raise fund for the budget.
‘’You know that the greater part of the budget is going to be funded by the loan because it is a deficit budget. And so we are working on modalities to make appropriate request before the legislature,” he said.
The Director-General of the Debt Management Office, Mrs. Patience Oniha, was reported to have said that government plans to raise 2.8 billion dollars of debt offshore as part of the 2018 budget financing plan.
“Some of the ministries have already advertised and commenced the procurement process pending which of the projects will finally come out of the budget and how much they will come out even the budget was finally approved,” he added.
He explained that with this, they would conclude the procurement process so that their work can go on.
‘’Those that are within the project competence of the Federal Executive Council, the respective ministers will take the memos to the council. That is where we are working now.”
On what the Presidency is doing to resolve the rift between the executive and the legislature amidst the 12-point condition handed down to the President by the legislatures.
Enang said there was no disagreement between the two organs.
According to him, what is happening is just the normal democratic engagement between the executive and the legislature.
Enang also hinted that the president also directed work to begin on supplementary budget for legislative action.
“Again, Mr. President is also directing that matters be collated so that proposal for either supplementary budget or budget amendment or virement be laid before the legislature for action,” he said.