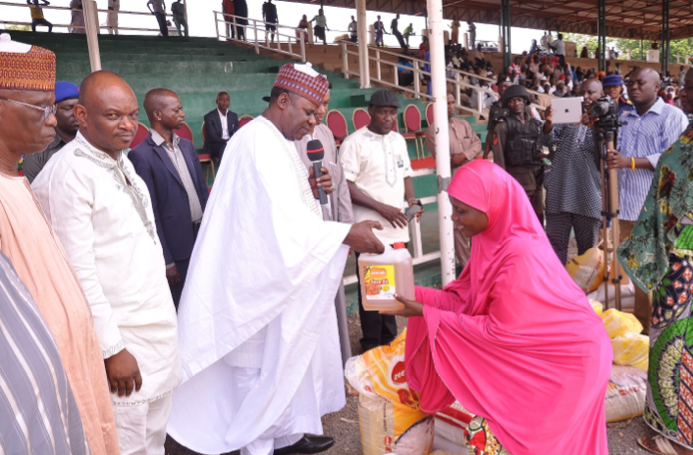 The Chairman, Presidential Committee on the North East Initiative (PCNI), Lt. Gen. T.Y Danjuma (rtd) has reiterated that the challenges confronting the North East are too overwhelming for anyone to take on alone. He said stakeholders must work in close collaboration if they are to have any chance of effecting the kind of relief and recovery that people living in the region so urgently need.

Lt. Gen. T.Y. Danjuma (rtd) made this statement at the distribution exercise of relief materials to IDPs and vulnerable persons at the Mahmud Ribadu Square, Yola, Adamawa state on Wednesday, 12th September 2018
The chairman also said that the PCNI has consistently brought together diverse stakeholders to address these complex and dynamic challenges. He cited the Emergency Response Plan of the Islamic Development Bank (IsDB), as an example of a stakeholder effort designed to deliver some components of the Immediate Comprehensive Relief programme outlined in the Buhari Plan.

The relief package distributed by the IsDB included a total of 6 (six) food items i.e. Rice, Beans, Semovita, Salt, Vegetable Oil, and Milk Powder, prioritized from the National Humanitarian Relief Food Items Basket, as well as well as complementary non-food items such as sanitary pads and washing soap is targeted at 970 Households in Borno, 235 Households in Yobe and 235 Households in Adamawa state in dire need of humanitarian assistance.”

Speaking earlier, Mr Muhammad Sabiu, the IsDB regional representative said that the N83 million worth items were to support the communities affected by insecurity in three states from the region.

According to him “The intervention is to complement governments` efforts in reducing child and pregnancy mortality rate and to reduce poverty in the communities,” Sabiu said.

In his remarks, Mr. Martins Babale, the Deputy Governor of Adamawa, thanked the Bank and the PCNI management for the gesture stating that Adamawa state government has been trying to solicit the aid of the Islamic Development Bank and has finally succeeded through the PCNI. He also disclosed that the state is gearing up for the expected floods in some local government areas and is seeking further support from development partners and stakeholders to cushion the effect of the anticipated impact of the floods.