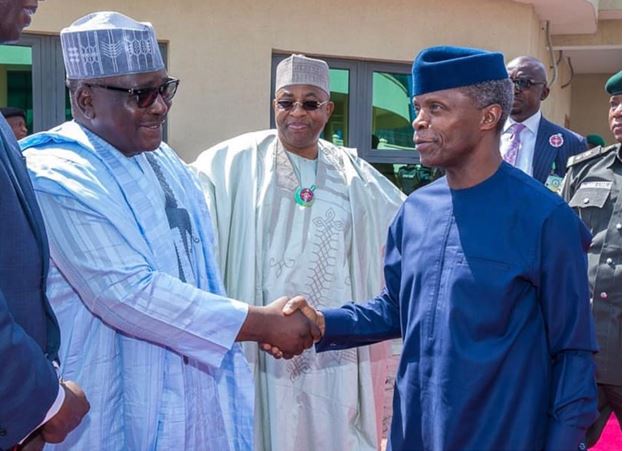 The Presidential Committee on the North-East Initiative (PCNI) in collaboration with the African Development Bank (AfDB), on Thursday, inaugurated the $258 million Inclusive Basic Service Delivery and Livelihood Empowerment Integrated Programme (IBSIP) in the region.

In his welcome address, the PCNI Vice Chairman Tijjani Tumsah said that the programme is in alignment with the Buhari Plan, the federal government’s comprehensive blueprint for the rehabilitation and reconstruction of the North-East. Tumsah, who represented the PCNI Chairman, Lt. Gen. T.Y. Danjuma (Rtd), stressed that the Buhari Plan does not focus only on rebuilding physical infrastructure alone but also on strengthening human capacity in the insurgency-affected region.

In his keynote address, the Vice President, Professor Yemi Osinbajo SAN, described IBSIP as an example of the federal government’s commitment to empowering the vulnerable. He said that despite the scale of the devastation in the North-East, significant gains have been made in stabilizing the region through the efforts of the military and humanitarian actors. The administration, he said, is now focused on addressing the medium to a long-term socioeconomic recovery of the region. He expressed appreciation to the AfDB for being a partner in progress with the Nigerian government in the drive to rebuild the North-East.

The President of AfDB, Dr. Akinwunmi Adesina said at the inauguration in Abuja that the intervention project would focus on agriculture, water security, economic empowerment, sanitation, social service delivery and quality of life. Adesina, who was represented by the AfDB Country Office Senior Director, Mr. Ebrima Faal, explained that the project will be implemented in five states, Borno, Adamawa, Bauchi, Taraba and Gombe as beneficiaries. The AfDB president said that the states which were the borrowers of the loan provided by AfDB would provide empowerment for women and the youth. He said that 55 percent of the beneficiaries would be women and young people in the troubled North Eastern part of the country. According to him, the project will touch the lives of millions of people and it has an initial five-year period of implementation. He noted that the bank had an ongoing project aimed at improving access to water supply and sanitation.

IBSIP is consonant with four of five priority areas of the bank known as the bank’s “High 5s’’which are “Light and Power Africa, Feed Africa, Industrialize Africa, Integrate Africa and Improve the quality lives of Africans.” “We developed this programme in response to the Federal Government’s plans for the North East by appealing to development partners to contribute to the recovery and rebuilding the crisis affected states. He hailed the IBSIP as an example “of an effective partnership between the government of Nigeria and the development partners” and remarked that the programme is fortunate to have had strong and dedicated teams to drive it to a successful conclusion. He added that the programme would ensure equity by providing access to basic services for all as well as incorporate special gender considerations by ensuring women were active participants in all stages.

According to Faal, training will be provided for women and youth entrepreneurs to increase their chances for employment and business opportunities. He said that the project would address rural electrification as included integrated energy systems for pumping of water, lighting for institutions and community centers and would also provide cold chains in health units and energy for drip irrigation. Tumsah Thanked the AfDB for the support and pledged the PCNI’s commitment to the successful implementation of the projects.