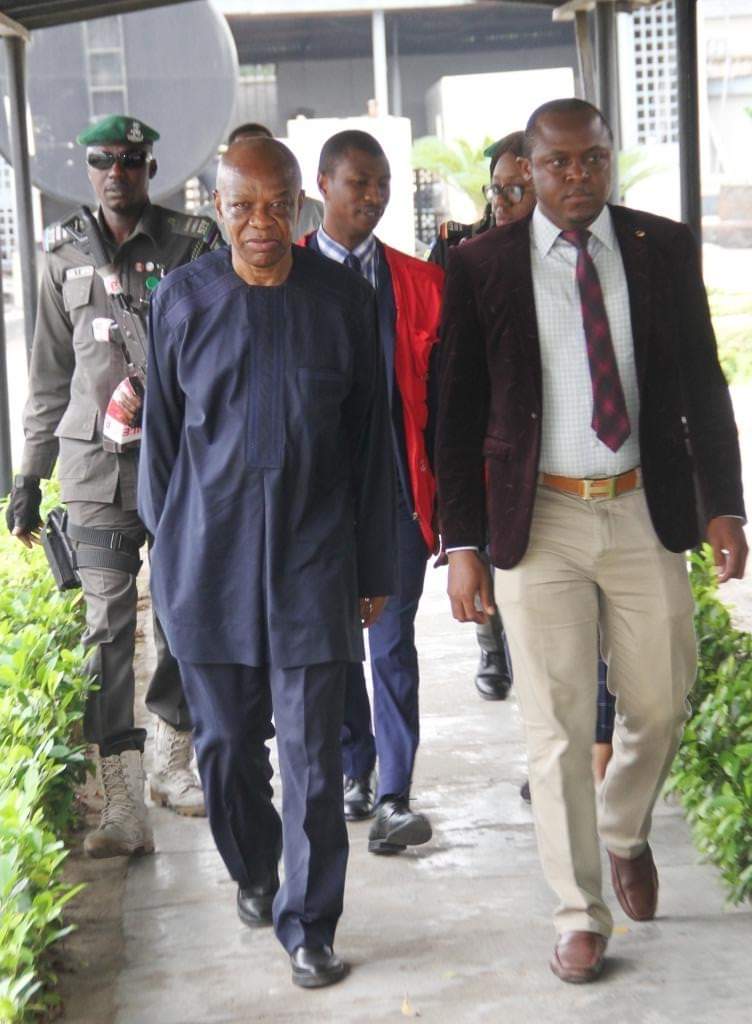 Maurice Iwu Back in Court, Gets N1b Bail

Justice Chuka Obiozor of the Federal High Court sitting in Ikoyi, Lagos, on Friday, August 9, 2019 granted bail to Prof. Maurice Iwu, a former Chairman of the Independent Electoral Commission, INEC, in the sum of N1bn (One Billion Naira) only.

Iwu was arraigned on Thursday, August 9, 2019 by the Economic and Financial Crimes Commission, EFCC, on a four-count charge bordering on money laundering to the tune of N1, 2013,000,000 (One Billion, Two Hundred and Three Million Naira).

One of the counts reads: “ That you, Prof. Maurice MMaduakolam Iwu, between December 2014 and March 27, 2015, in Nigeria within the jurisdiction of this honourable court aided the concealment of the total sum of N1, 203,00,000.00( One Billion, Two Hundred and Three Million Naira) in Bioresources Institute of Nigeria, BION, Limited’s Account No. 1018603119 domiciled in the United Bank for Africa Plc, which sum you reasonably ought to have known forms part of proceeds of unlawful act to wit: fraud and you thereby committed an offence contrary to Sections 18(a), 15(2) (a) of the Money Laundering Prohibition Act, 2011 as amended and punishable under Section 15 ( 3) of the same Act.”

The defendant pleaded not guilty to the charge preferred against him.

During the proceedings on Thursday, August 8, 2019, Iwu’s lawyer, Ahmed Raji, SAN, informed the court of a pending application for bail on behalf of his client.

However, the prosecution counsel, Rotimi Oyedepo, in his response, told the court the he received the bail application in court yesterday and would, therefore, need some time to respond.

Consequently, Justice Obizor, after listening to both parties, adjourned to Friday, August 9, 2019(today) for hearing of the bail application and also ordered the defendant to be remanded in the EFCC Custody.

At today’s sitting, the defence counsel, Raji, informed the court of summons for bail dated August 7, 2019 brought pursuant to Sections 157 and 158 of the Administration of the Criminal Justice Act, ACJA and Sections 35 and 36 of the Constitution of the Federal Republic of Nigeria.

The defence counsel, who described his client as a renowned professor who had served a national institution in Nigeria, said “an accused person is presumed innocent until proven otherwise.

“The burden of proof as to why the defendant should not be granted bail lies on the prosecution.”

He further submitted that “the Law is trite that when an investigating/prosecuting agency has admitted to granting administrative bail to a person; such person is entitled to bail in the court of law.”

He, therefore, urged the court to admit the defendant to bail on either of the terms.

The prosecution counsel, Oyedepo, however, opposed the prayers of the defence in an 11-paragraph counter-affidavit.

Oyedepo argued that there was a possibility that the defendant might frustrate the trial by intimidating the witnesses involved if he was granted bail.

Oyedepo further submitted that, in the unlikely event that bail was granted, the defendant should be given conditions that would make him stand his trial.

Oyedepo, therefore, urged the court to impose conditions that would prevent the defendant from interfering with the witnesses, adding that “if there be any communications, there should be consequences.”

He also urged the court to direct the defendant to forfeit something of value that amounts to the alleged amount in the event that he absconds.

In his ruling, Justice Obiozor granted the defendant bail in the sum of N1bn (One Billion Naira), with two sureties.

One of the sureties must have a property in Lagos, show proof of tax payment for three years, statement of account from bank and submit two passport photographs.

The other surety must be a civil servant on Grade Level 16, show evidence of tax payment for three years and statement of account from a bank.

The defendant was ordered to deposit his intentional passport to the Deputy Registrar of the court.

The defendant was also ordered to stop all manner of communication with the witnesses.

Justice Obiozor ordered the defendant to be remanded in prison custody pending the fulfilment of his bail conditions.