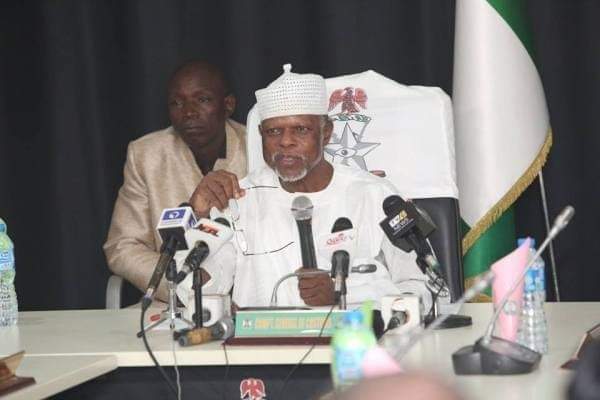 Comptroller General of Customs, Hameed Ali Speaks to the Press

Good morning gentlemen of the press, and thank you for honouring our invitation to this press briefing. We have invited you here today to brief you on the progress of the joint border security exercise along our borders and its impact on our nation’s security and economy.

Some of you will recall that as part of measures to secure Nigeria’s land and maritime borders, the Nigerian Customs Service (NCS) and Nigerian Immigration Service (NIS), in collaboration with the Armed Forces of Nigeria (AFN) as well as the Nigeria Police Force (NPF) and other security and intelligence agencies commenced a joint border security exercise, codenamed ‘EX-SWIFT RESPONSE’ in 4 geopolitical zones of the country, namely; South South, South West, North Central and North West on the 20th August 2019.

The exercise is being coordinated by the Office of the National Security Adviser (ONSA) and is aimed at better securing our borders in order to strengthen our economy and address other trans-border security concerns.

Overtime, Nigeria has been confronted with numerous trans-border economic and security challenges. These challenges range from banditry, kidnapping, smuggling, illegal migrants and proliferation of light weapons amongst others.

Meanwhile, the preference for foreign goods, especially food items like rice has continuously impoverished our farmers and adversely affected domestic government policies supporting the agricultural sector to enhance food security. It is however disturbing that some neighbouring countries circumvent the ECOWAS protocol on transit. For clarity, the ECOWAS protocol on transit demands that when a transit container berths at a seaport, the receiving country is mandated to escort same without tampering with the seal to the border of the destination country. Unfortunately, experience has shown that our neighbours do not comply with this protocol. Rather, they break the seals of containers at their ports and trans-load goods destined for Nigeria.

The partial closure has so far curbed the smuggling of foreign rice into the country, in addition to other prohibited items. Our series of interactions and engagements with Rice Miller Association of Nigeria since the commencement of this exercise, has shown that the border closure has enhanced more production and milling of Nigerian rice.

Patronage of Nigerian rice has increased and farmers are expanding their farms as well as engaging more hands. Furthermore, the border closure has impacted positively on revenue generation of the Federal Government which in turn will be used to build more infrastructures and develop critical sectors of the nation’s economy. The border exercise has also curbed diversion of petroleum products from Nigeria to neighbouring countries.

In the area of security, the ongoing exercise has recorded a number of seizures and arrests that would have had grave security consequences.

​It is important to note that 95 percent of illicit drugs and weapons that are being used for acts of terrorism and kidnapping in Nigeria today come in through our porous borders. However, since this partial closure, the acts have been drastically reduced. Our conclusion is that, the arms and ammunition these terrorists and criminal elements were using no longer gains access into the country. in addition, the drugs which affect the health and the wellbeing of Nigerians have equally been reduced.

The government, through diplomatic channels will continue to engage our neighbours to agree to comply with the ECOWAS Protocol on Transit. Goods that are on the prohibition list to Nigeria, such as rice, used clothing, poultry products and vegetable oil should not be exported to the country. As a result of this closure, Niger Republic has already circulated an order banning exportation of rice in any form to Nigeria. In addition, the National Assembly has supported the executive directive on the border closure and the efforts of security agencies in executing the task.

​The exercise has provided a unique platform for the various participating agencies to jointly operate together thereby strengthening inter-agency collaboration and reducing animosity. It is also necessary to place on record that this is the first exercise in recent times, that military, paramilitary as well as intelligence and security agencies have come together to conduct such an exercise which is akin to a National Security exercise.

8.​We will continue to seek the support of all and sundry including the media to ensure that the desired objectives of this exercise, that is; to promote a secured, peaceful and prosperous Nigeria are fully achieved.

While we call on Nigerian local rice consumers to be patriotic by patronizing Nigerian rice, as this will further help the country in reaching self-sufficiency in local rice production and boost our economy, we equally appeal to the business community to see the exercise as opportunity to further create a conducive environment for local businesses to thrive in the interest of national security and development.

Finally, let me thank you all for attending this press briefing. We continue to count on your support throughout this exercise, which is critical to our national interests and by implication national security.