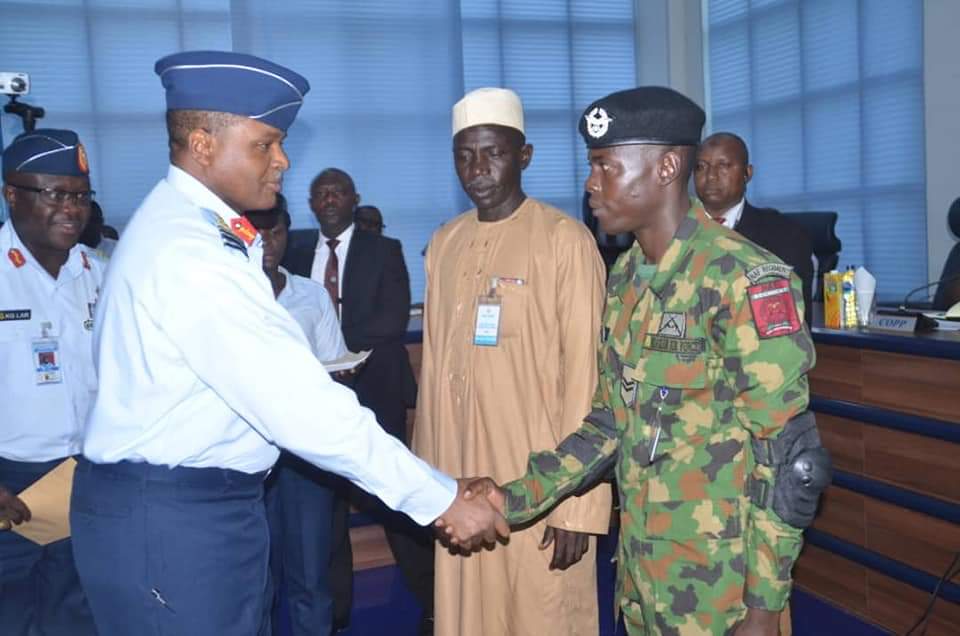 Bashir Umar, Aircraftman Who Returns €37,000 to Owner gets Rewarded by Nigeria AirForce

The Nigerian Air Force (NAF) yesterday, 25 July 2019, granted accelerated promotion to Aircraftman Bashir Umar, who found and returned the sum of 37,000 Euros to Alhaji Ahmad, the owner of the lost money at the Hajj Camp Market at the Mallam Aminu Kano International Airport (MAKIA) Kano. This act of integrity drew the attention of the President, Commander-in-Chief of the Armed Forces of Nigeria, President Mohammadu Buhari, who described it as “uncommon, patriotic and exemplary,” while enjoining Nigerians, especially the youth, to emulate such worthy conduct. With this, the airman, who was promoted 2 steps forward to the rank of Corporal, has not only skipped the rank of Lance Corporal, but has attained a position that would have taken him over 7 years of uninterrupted military service to reach.

Speaking during the decoration ceremony, the Chief of the Air Staff (CAS), Air Marshal Sadique Abubakar, who also presented the Airman with a letter of commendation, expressed extreme delight to be part of the history-making, exemplary conduct of the Airman. He added that the act duly portrayed the good values which the NAF holds in high esteem and this was why an aircraft was specially detailed to airlift the Airman from Kano to Abuja to attend the decoration and award ceremony.

According to him, “the special promotion of Aircraftman Bashir to the rank of Corporal, apart from serving as a reward for good conduct, is also to serve as motivation to other airmen and airwomen to aspire for such elevation.

Aircraftman Bashir has earned the rank of Corporal by good conduct and as part of our desire to reward uncommon good deeds and excellence, we have chosen to have him decorated in front of his friends, peers and family”, the CAS added. Air Marshal Abubakar equally commended the Air Officer Commanding Air Training Command (AOC ATC), Commander National Air Defence Corp (NADC), Military Airport Commadant MAKIA as well as the ATC Air Warrant Officer and Regimental Sergeant Major (RSM) MAKIA for providing the leadership and necessary guidance that had engendered such an admirable act.

The CAS, who also used the opportunity to thank the press for their continued support to the NAF over the years, also thanked Aircraftman Bashir’s parents for providing the support and wholesome home environment for the Airman before he joined the Service. “He will continue to need your support, perhaps even more now than ever. I commend you for grooming him with the values that have earned him this accolade”, he said.

Earlier in his welcome address, the Chief of Administration Headquarters NAF, Air Vice Marshal Kingsley Lar, noted that the event was being held in keeping with NAF’s tradition of celebrating personnel that perform exceptionally and display such commendable acts. He noted however that the presence of the CAS, along with Branch Chiefs, Directors and other senior officers, at the ceremony to honour Corporal Bashir was a reflection of the premium the Service places on integrity, as one of its core values. He said it was also a reflection of the enabling environment and positive leadership provided by the CAS. He therefore pledged the commitment of NAF personnel to continue to embody, in words and actions, the values for which the NAF is known.

Corporal Bashir Umar was born on the 1st of June 1995 into the family of Mallam Bashir Abdulmumuni and Salamatu Aliyu in Maiha Local Government Area of Adamawa State. He attended Maksha Nursery and Primary School Maiha from 1999 to 2005 where he obtained his First School Leaving Certificate. After which he proceeded to Tijjani Boloni College of Arabic and Islamic studies from September 2006 to September 2009, he then proceeded to Maiha Government Secondary School where he obtained his Senior Secondary Certificate Examination in 2012.

Corporal Bashir Umar is a graduate of Adamawa State Polytechnics Yola, and holds a diploma in Crime Prevention Management and Control which he obtained in November 2016. Corporal Bashir Umar, who is a Regiment Airman, was enlisted into the NAF on 1 August 2016 after his Basic Military Training at the Military Training Centre Kaduna. He is currently serving under the NADC as a member of the Mobile Air Defence Team (MADT) at MAKIA Kano.