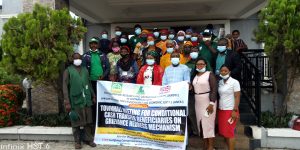 The sensitisation programme was organised by the Socio-Economic Research and Development Centre, (SERDEC) in partnership with African Network For Environment and Economic Justice (ANEEJ).

Speaking at the town hall meeting in Lokoja on Friday, the Executive Director of SERDEC, Mr Tijani AbdulKareem, said the essence of the meeting was to get feedback and reactions on the process used in disbursing the N10, 000 bi-monthly payment to CCT beneficiaries.

Abdulkareem noted that there had been issues emanating from the CCT exercise which needed to be tackled to ensure transparency and accountability in the system.

According to him, recommendations will be made from the outcome of this meeting which the relevant authorities will work with in achieving the sole aim of the CCT programme in eradicating poverty at the grassroots.

He stressed the need for all stakeholders to work together to eradicate corrupt practices in the country.

The executive director said that the meeting would give opportunity to the beneficiaries to express their grievances, and address issues of preventing and reporting corrupt act within CCT programe in the state.

He reiterated that the citizens and beneficiaries had the responsibility to combat corruption in the system.

He urged the participants to feel free to speak about the challenges they faced in collecting their stipends, stressing that the purpose of the meeting was to ensure feedback mechanism from beneficiaries.

In her remarks, Mrs Falilat Abdurasaq, the Head of Kogi State CCT Unit, commended the organisers for the gesture, and the opportunity to interface with the beneficiaries.

Abdurasaq said that it was the right of the beneficiaries to complain over any abnormalities that must have taken place during the cash disbursement exercise, and various challenges facing them in their communities.

”The government wants to improve the wellbeing, health, financial status and improve the standard of living of every vulnerable households enrolled under the CCT programme,”she said.

In his paper presentation, titled: “The Structure of Grievance Redress Mechanism in the CCT Programme in Kogi”, the state’s Grievance Redress Manager, Mohammed Gambo, said every complain made by beneficiaries would be made confidential and treated as such.

Gambo stressed that the essence of GRM was to bring out modalities to make the programme better and accountable for all.

During the interactive session, led by SERDEC Media Officer, Katherine Udok, the beneficiaries identified some grievances to include issues of divorce, compromise, among others.

News Agency of Nigeria (NAN) reports that the GRM hotlines were provided for the CCT beneficiaries at the meeting for them to lodge their grievances directly to Lokoja or Abuja CCT office, as the case may be.

One of the participants, Mrs Zainab Gambo from Lokoja Local Government Area, commended the payment process, adding that the money had been of great benefit to them and their respective families. (NAN)