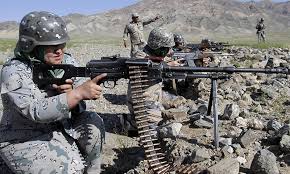 An air attack killed at least 11 Afghan police officers in the volatile and opium-rich southern province of Helmand, officials said Monday, but there were conflicting claims over who carried out the bombardment.The Afghan interior ministry spokesman said the strike on Sunday during a police operation against drug smugglers was carried out by NATO forces, which rejected the claim in a statement.Afghanistan’s own air force also has the capability to carry out aerial attacks, but both the force and the defense ministry declined to comment.Eleven counter-narcotics police were killed and four others were wounded in an air strike carried out by international forces in Garmsir district of Helmand province,” deputy interior ministry spokesman Najib Danish told AFP.

– Surging air strikes -A Helm and police department official gave a higher death toll, saying 14 bodies had so far been recovered from the site of the bombardment.But a NATO spokesman said there were no coalition airstrikes in Helmand on Sunday, adding that there was one in neighbouring Kandahar province to “eliminate threats to the force”.

Helmand, the heartland of the global opium trade, is one of the biggest flashpoints in the 14-year Taliban insurgency that erupted after a US-led invasion brought down their regime in 2001.

Civilian and military casualties caused by NATO forces have been one of the most contentious issues in the 14-year campaign against Taliban insurgents, provoking harsh public and government criticism.

A US airstrike killed up to 10 Afghan soldiers in July at an army checkpoint in Logar province south of Kabul, one of the deadliest episodes of “friendly fire” from foreign forces in recent years.

US-led NATO forces ended their combat mission in Afghanistan last December, though a 13,000-strong residual force remains for training and counter-terrorism operations.But there has been an escalation in air strikes by NATO forces in recent months despite the drawdown.

Foreign coalition forces carried out 106 air strikes in June, a sharp jump compared to 41 in the previous month, according to NATO statistics.

NATO forces stepped up air raids in Helmand in recent months after the Taliban advanced on some districts.

From August 22-29 US forces conducted 18 strikes in and around Musa Qala district to destroy Taliban positions, according to a NATO spokesman.

The strategic district recently fell to the Taliban but was subsequently recaptured.

While “friendly fire” incidents involving foreign coalition forces are a volatile issue in Afghanistan, UN statistics show that the Taliban are responsible for most deaths.

A NATO airstrike in June last year killed five US troops and an Afghan soldier in an accident during clashes with insurgents.

The incident could have been avoided if American forces had communicated properly and understood their aircraft’s capabilities, military investigators later said.

US President Barack Obama has backpedalled on plans to shrink the US force in Afghanistan this year by nearly half, agreeing to keep the current level of 9,800 US troops until the end of 2015.

Source of the news(Yahoo News)