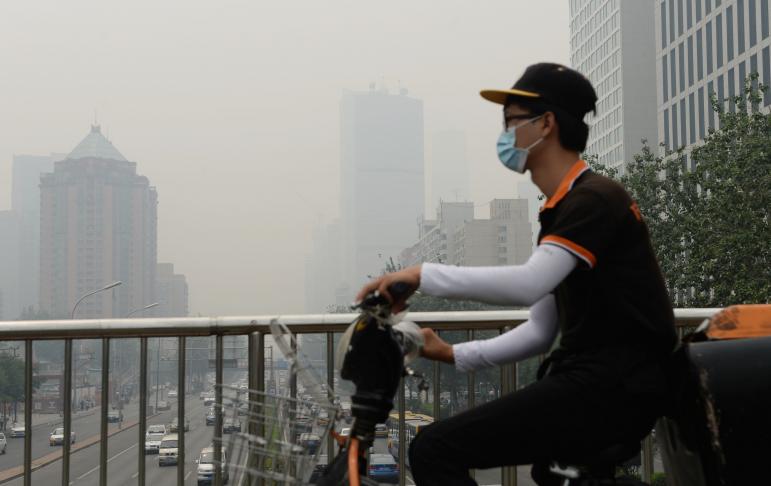 Smog in Chinese metropolis Shanghai hit its highest level since January on Tuesday, prompting schools to ban outdoor activities and authorities to limit work at construction sites and factories as polluted air spreads around the country.

Shanghai’s heavy smog arrived just a day before the city hosts the closely-watched World Internet Conference, which will include a speech by President Xi Jinping. Attendees are expected to include global tech industry titans and the leaders of countries such as Russia and Pakistan.

On Tuesday, a curtain of grey smog fell over Shanghai, China’s business capital with a population of over 20 million. It limited visibility and drove the city’s air quality index (AQI) above 300, a level deemed “hazardous” on most scales and which can have a long-term impact on health.

The levels of PM 2.5, dangerous tiny pollutants, hit 281, the highest since mid-January, according to data compiled by the U.S. Department of State. PM 2.5 particles are a major cause of asthma and respiratory diseases, experts say.

“Because of (the smog) my kid often gets sick, often has a stuffy nose and a cough,” said Valen Wang, 40, a full-time mother in Shanghai.

“At the moment, the pollution feels like it just keeps on getting worse, and all we can do is slow it down a little.”

The smog prompted Shanghai authorities to issue a “yellow alert,” the third-highest level warning, and to advise elderly, young and sick residents to remain at home, avoid outdoor activity and keep the windows closed.

China’s pollution is causing a headache nationwide, with many rivers and lakes clogged with garbage, and heavy metals in the soil. Bad air sometimes causes flight delays.

Some Shanghai residents donned masks to filter the air, while others shunned protection.

“My throat is rather dry and it hurts,” Cao Yonglong, a 30-year-old delivery man said. “I keep wanting to have a drink of water.”