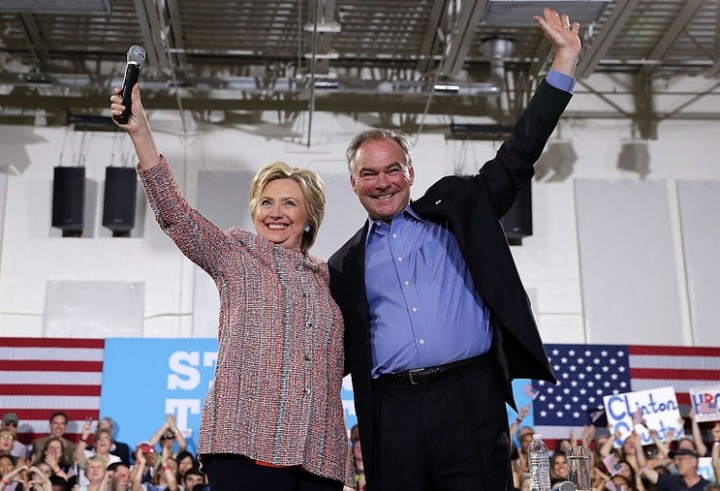 Yesterday, Hillary Clinton announced her running mate in the race for the White House – Tim Kaine. The remarkable thing about him is that he has always managed to stay below the United States national political radar. Below is the profile of the US possible next Vice-president.

I’m thrilled to announce my running mate, @TimKaine, a man who’s devoted his life to fighting for others. -H pic.twitter.com/lTVyfztE5Z

Democrat Tim Kaine served as governor of Virginia from 2006 to 2010, and is currently a member of the U.S. Senate. In 2016, Hillary Clinton chose him as her vice presidential running mate.

Born in Minnesota in 1958, Tim Kaine began practicing law in Richmond, Virginia, after graduating from Harvard Law School in 1983. He was voted to the Richmond City Council in 1994, marking the start of a political ascent that eventually led to his election as Virginia governor in 2005. Following a stint as chairman of the Democratic National Party, Kaine was elected to the U.S. Senate in 2012. In 2016, Democratic presidential candidate Hillary Clinton chose Kaine as her vice presidential running mate. 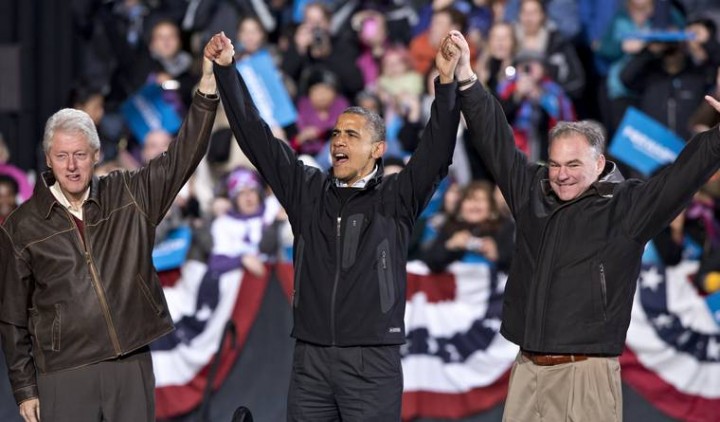 Politician, lawyer, Virginia governor and senator, Timothy Michael Kaine was born on February 26, 1958, in St. Paul, Minnesota, but grew up in the area of Kansas City, Missouri. The eldest son of an ironworker and a home economics teacher, Kaine has noted he wasn’t raised in an overtly political household, but became drawn to matters of public interest during the political and social upheaval of the 1960s.

Kaine attended Rockhurst High School, an all-boys Jesuit high school, where he joined spring mission drives to fund Jesuit activities in Honduras and became student government president. He went on to the University of Missouri, completing his bachelor’s degree in economics in three years, before entering Harvard Law School.

Kaine took a year off from law school to volunteer with Jesuit missionaries in Honduras, where he ran a small vocational school for teenage boys while honing his Spanish. It was an eye-opening experience for the Midwesterner, who witnessed the devastating effects of poverty up close, and ignited his longstanding commitment to social justice.

After earning his J.D. from Harvard in 1983, Tim Kaine moved to Richmond, Virginia, to put his law degree to use. He made a name for himself early in his career by taking on the appeal of a death row inmate named Richard Lee Whitley. Although Whitley had confessed to sexually assaulting and murdering a 63-year-old neighbor, Kaine was deeply opposed to the death penalty, and his investigation into Whitley’s troubled background had spurred him to fight for the inmate.

Over the course of 17 years as a practicing lawyer, Kaine specialized in representing people who had been denied housing opportunities because of their race or disability. Devoting much of his time to pro-bono work, he helped found the Virginia Coalition to End Homelessness and was a board member of the Virginia chapter of Housing Opportunities Made Equal. Additionally, he taught legal ethics at the University of Richmond Law School for six years.

Tim Kaine entered politics in 1994 when he was elected to the Richmond City Council. He served six years, including the last two as mayor when he helped to create and implement the law known as Project Exile to reduce gun-related violence. He was then elected Virginia’s lieutenant governor in 2001, a role in which he served as president of the Virginia Senate.

When Kaine ran for governor in 2005 against Virginia Attorney General Jerry Kilgore, he introduced himself as a leader guided by his family and Catholic faith. He also urged his fellow religious Democrats to talk about their faith in campaigns, saying “Voters want to understand what motivates you.” When Republicans attacked Kaine’s opposition to the death penalty, he responded with a TV ad in which he explained that his religious beliefs led him to oppose capital punishment, but that he would enforce the state’s laws. Similarly, although he was personally opposed to abortion, he felt obligated to uphold its legality.

Tim Kaine was inaugurated in Virginia’s colonial capitol of Williamsburg as the state’s 70th governor on January 14, 2006. His star on the rise, he was selected to give the Democratic response to President George W. Bush’s State of the Union address shortly afterward.

Battling partisan gridlock during his term, Kaine cut social welfare programs to balance the budget and invested in infrastructure development, but otherwise struggled to push through major legislation. His national profile continued to rise, however, as he was the first governor outside Illinois to endorse Barack Obama for president. He was widely considered a strong candidate to be picked as the Democratic presidential nominee’s running mate, before eventually losing out to Delaware Senator Joe Biden.

Kaine became chairman of the Democratic National Committee in 2009, and held on to the position despite his party’s significant losses in the 2010 midterm elections. He stepped down in 2011 with the intention of campaigning for Jim Webb’s soon-to-be-vacated Virginia senate seat.

After defeating former Virginia Senator and Governor George Allen in the 2012 campaign, Tim Kaine became the first senator to deliver a speech in Spanish from the Senate floor.

Since being elected to his post, Kaine has joined the Senate’s Armed Services, Budget, Foreign Relations and Aging Committees. Among his accomplishments, he introduced the Troop Talent Act of 2013 to help servicemen and women transition to the civilian workplace, and coauthored the Iran Nuclear Agreement Review Act of 2015. Additionally, he is a founder and co-chair of the bipartisan Career and Technical Education (CTE) Caucus, and has introduced legislation to address issues of sexual assault and drug treatment.

On July 22, 2016, Democratic presidential candidate Hillary Clinton announced via text message to her supporters that she had selected Kaine as her vice presidential running mate. 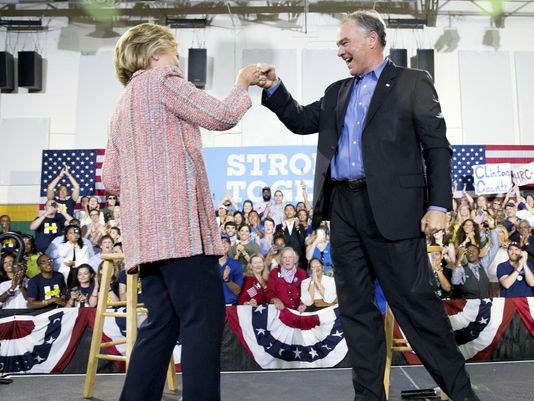 The Kaines, who married on November 24, 1984, are actively involved with Richmond’s St. Elizabeth Catholic Church. They have three children: Nat, Woody and Annella.

Hillary Clinton on Her Choice of Running Mate

Tim is a lifelong fighter for progressive causes and one of the most qualified vice presidential candidates in our nation’s history.

But his credentials alone aren’t why I asked him to run alongside me.
Like me, Tim grew up in the Midwest. During law school, he too took an unconventional path he took time off and went to Honduras to work with missionaries, practicing both his faith and his Spanish.

When he returned to the states and graduated from Harvard Law, he could have done anything. But instead of going to some big corporate firm, he chose to fight housing discrimination as a civil rights lawyer in Richmond. He and his wife joined a church, built a home centered around their faith, and raised three beautiful children. Then, after 17 years of practicing law, Tim ran for city council and won.

Tim says his experience on city council taught him everything he knows about politics. To the people in Richmond, an underfunded school wasn’t a Democratic or Republican problem. It was simply a problem that needed fixing, and his constituents were counting on him to solve it. So Tim would do it. He’d roll up his sleeves and get the job done, no matter what.

He’s a man of relentless optimism who believes no problem is unsolvable if you’re willing to put in the work. That commitment to delivering results has stayed with him throughout his decades-long career as a public servant. So I could give you a laundry list of things he went on to accomplish as mayor of Richmond, governor of Virginia, and in the United States Senate.

But this is what’s important: Tim has never taken a job for the glory or the title. He’s the same person whether the cameras are on or off. He’s sincerely motivated by the belief that you can make a difference in people’s lives through public service.
That quality comes through in every interaction. To know Tim is to love him. When I was talking to people about this decision, I couldn’t find anyone Democrat or Republican who had a bad thing to say about him. From his staff over the last 20 years to his colleagues in the Senate, Tim’s beloved.

He is a genuinely nice person, but Tim is no one’s punching bag. He will fight tooth and nail for American families, and he’ll be a dogged fighter in our campaign against Donald Trump and Mike Pence.
I want you to know that I didn’t make this decision lightly.

I’ve had the privilege of seeing two presidents and two vice presidents up close. I want a vice president who can be my partner in bringing this country together. I want someone who will be able to give me their best advice, look me in the eye, and tell me they disagree with me when they do.

But what matters most is a simple test that’s not so simple to meet: whether the person could step in at a moment’s notice and serve as president. I have no doubt that Tim can do the job. I want him by my side on the trail and in the White House.