Buhari: ‘Significant’ Asset Recovery Made In The Anti-Corruption Fight In Nigeria 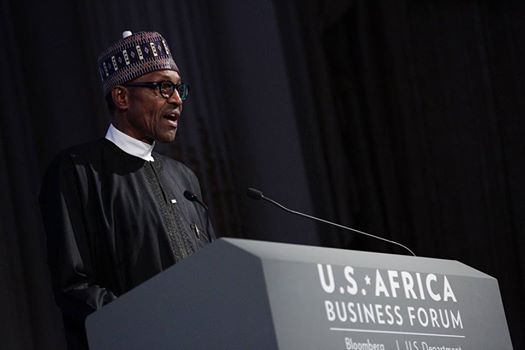 ‘Significant’ recovery of stolen assets from former public office holders has been made, President Muhammadu Buhari told a global audience on Tuesday in New York, United States. And he announced that the recovered funds “are being channeled towards the development of critical infrastructure and the implementation of social inclusion programmes for our people.

President Buhari said this in a statement that embodied Nigeria’s positions at the 71st Session of the UN General Assembly(UNGA 71) in New York. He said “fighting corruption remains a cardinal pillar” of his administration.

President Buhari said Nigeria remained committed to achieving the SGDs, which he noted, “underscore the imperative for our collective will towards finding enduring and sustainable solutions to addressing global disparities.”

He also expressed delight that the anti-corruption campaign has started yielding positive dividends including significant recovery of stolen assets.

“The recovered funds President Buhari said, adding that the capacity of government agencies was being strengthened to institutionalize reforms that will ensure transparency and good governance.

He said that Nigeria will continue to call for speedy and unconditional recovery of illicit assets stashed abroad, stressing that “Nigeria supports the development of an international legal framework to enforce anti-corruption measures and strengthen existing international institutions to effectively deal with corrupt practices.”

While acknowledging that Nigeria is not spared the adverse effects of the current global economic downturn, the President noted that his administration remained undeterred and has embarked on comprehensive diversification reforms by shifting emphasis to non-oil sectors of “mining, agriculture, industrialization, infrastructure development and the creation of the enabling environment for Foreign Direct Investment.”

He stressed that “Our strategic objective is to stimulate the economy, restore growth and accelerate recovery. In doing this, we are taking measures to reduce the cost of governance and increase expenditure on infrastructure and ensure environmental best practices.”

On Climate Change, President Buhari said that Nigeria is proud to have been part of the process leading to the adoption of the Paris Agreement in December 2015, and supports the African Union initiative on the Great Green Wall to halt desertification. While attributing the drying up of Lake Chad to the negative consequences of Climate Change, he called for global support to raise $14 billion US Dollars being the estimated cost of restoration of the Lake over a five-year plan.

The President said that it was in furtherance of the country’s commitment to environmental sustainability that Nigeria launched the clean-up of Ogoniland, even as he called on development partners and multinationals to contribute to the Ogoniland Restoration Fund.

The Nigerian leader also spoke on dangers posed by global terrorists, adding that “Nigeria has made remarkable progress in our resolve to defeat Boko Haram whose capacity to launch orchestrated attacks as a formed group has been severely degraded. In the last few months, their operations have been limited to sporadic use of Improvised Explosive Devices (IEDs) against soft targets.”

Nigeria, he noted, will continue to fight terrorism “based on the established rules of engagement and in conformity with international best practices,” as he called for enhanced international cooperation to defeat the global scourge.

President Buhari also stated Nigeria’s position on flow of migrants, statehood for Palestinians in conformity with Security Council resolutions; the vital role of youth to national development; nuclear security and the reform of the United Nations Security Council to give Africa adequate representation.

“Nigeria stands ready to serve Africa and the world on a reformed Security Council to advance international peace and security,” the President declared.