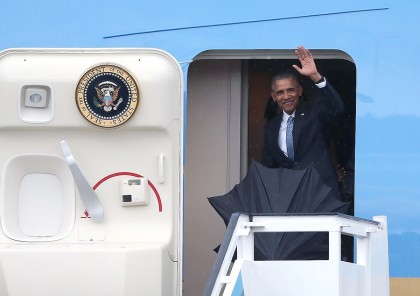 Obama, in the three-and-half-minute address, reminded the citizens not to take for granted that America was bound by an adherence to a common belief that everybody was created equal.

“As a country, we just emerged from a noisy, passionate and sometimes divisive campaign issues; after all, elections are often where we emphasise what sets us apart.

“We face off in the context of ‘us’ versus ‘them’. We focus on the candidates we support instead of some of the ideals that we share.

“But a few short weeks later, the Thanksgiving reminds us that no matter our differences, we are still one people, part of something bigger than ourselves.

“We are communities that move forward together. We are neighbours, we look out for one another, especially those among us with the least. We are always simply Americans,” Obama said.

He recalled the pain of the American civil war, for which so many gave their lives and which made possible, a new birth of freedom.

According to him, when the fate of the Union hung in the balance, then President Abraham Lincoln proclaimed a day of Thanksgiving.

Thanksgiving, therefore, is when the nation’s gifts should be solemnly, reverently and gratefully acknowledged as with one heart and one voice by the whole American people, according to him.

“Today, we continue to give thanks for those blessing and to all who ensure that they will be our inheritance. We remember the determined patriots who landed at the edge of the world in search of freedom.

“We give thanks to the brave men and women who defend that freedom in every corner of the world.

“And we honour all people from the first Americans to our latest arrivals who continue to shape our nation’s story and our rich heritage and give meaning to our founding values.

“That use we must never take for granted that in America, we are bound not by any one race or religion but rather an adherence to a common belief.”

Obama said that all of Americans were created equal to think, worship, speak, and love as they please adding, “the gift of democracy is ours and ours alone to nurture and to protect”.

“Never doubt, that is what makes us America and that is what we come from, what we look like and what faith we practice.

“But the ideals to which we pledged our allegiance is about our capacity to live up to the creed: “E Pluribus Unum”, that out of many, we are one,” he said.

The outgoing president challenged Americans to continue to welcome the contributions of all people, stand up for each other and speak up for what is right.

“As long as we stay true to these ideals not just when it is easy but when it is hard, then no one can ever take away our liberty.

“Our best days would always be ahead and we would keep building a future where all of our children know the promise of America,” Obama said.

Obama’s two-term tenure would end on Jan. 20, 2017 when the president-elect Donald Trump would be sworn-in.