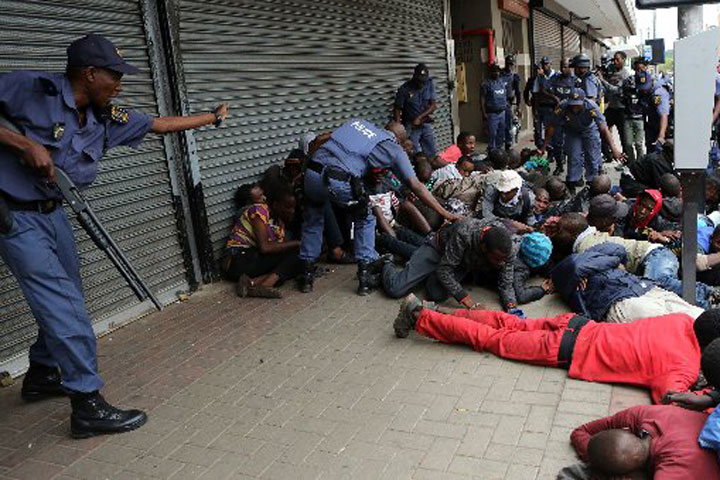 136 Arrested in Pretoria Over Xenophobic Attacks

South African police on Friday arrested 136 suspects in connection with their involvement in the xenophobic attacks unleashed on immigrants in Pretoria.

The arrests followed a fresh wave of xenophobic attacks in Gauteng Province heightened by an anti-immigrants march held in Pretoria on Friday.

The march saw numerous shops around the city centre closed, with customers still locked inside.

The 15km march left a trail of destruction when marchers struck makeshift shelters of a religious group camping outside the Tshwane Events Centre.

Police fired rubber bullets to try and disperse protesters as well as the large number of foreign nationals who gathered together for safety.

Acting National Police Commissioner Kgomotso Phahlane said they had stepped in and the situation in Pretoria was now calm and under control.

Officers found a 5 litre container filled with petrol as well as clothes on one of the suspects.

Lt. Gen. l Phahlane said: “136 people have been arrested over 24 hours but we are unable to confirm how many of those arrested are South African and how many aren’t. We cannot allow situation to be overwhelmed by crowd. We use proportional force.”

A man was shot with rubber bullets when he got caught in the crossfire between police and protesters during the anti-foreigner march.

Mr Sello Tshatswayo said he was trying to stop a taxi to go home from school in the Pretoria CBD.

“They just started shooting, we were in a group and we all just ran in different directions,” Mr Tshatswayo said.

Fears were mounting among residents that the clashes could spill into the weekend.

“It was really scary with lots of police in our area and choppers over Pretoria west. This can’t be right, we can’t live in fear like this. Authorities need to deal with it otherwise it will continue throughout the weekend,” said Ms Hlengiwe Mabhena, an Atteridgeville resident.

“It was bad in the morning because anybody who was not part of the march was becoming a target. They even uprooted trees and damaged highways’ side barriers‚” another resident, Mr Bonnie Molefe, said.

Tshwane Mayor Solly Msimanga said the anti-immigrant sentiments have no place in our society.

“The issue of rising unemployment requires all our collective efforts to turn this tide around. Tshwane, like other urban centres around the globe is faced with an urgent need to address the increasing rate of urbanisation and create more work opportunities,” he said.