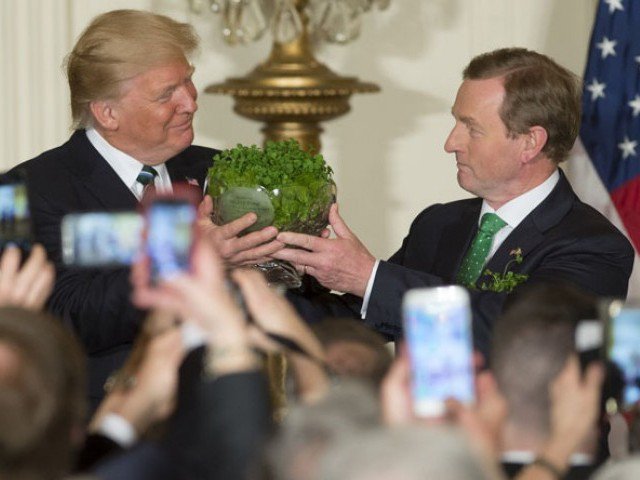 President Donald Trump sparked web derision for himself on Thursday as he tried to impress visiting Irish Prime Minister Enda Kenny to the White House, with an Irish proverb.

But what he quoted was neither Irish nor even a proverb.

“As we stand together with our Irish friends, I’m reminded of that proverb … And this is a good one. This is one I like, I’ve heard it for many many years, and I love it,” Trump said.

“Always remember to forget the friends that proved untrue. But never forget to remember those who have stuck by you,” he quoted the proverb.

Trump reads one of his favorite Irish proverbs pic.twitter.com/KgE5ipvepw

Have literally never heard this in my entire life. https://t.co/3gSBhbvdl2

With all due respect to the president’s reputation for scrupulously checking his sources, I don’t think this is an Irish proverb. https://t.co/1EvGGMsE9r

As it turned out the 70 year-old American leader is wrong on the source.

According to a report by Washington Post, Google checks later revealed that President Trump’s ‘favourite proverb’ is part of a poem written possibly by a Nigerian poet.

It came from a poem written by, Albashir Adam Alhassan.

Here is the poem by Alhassan:

Always remember to forget,
The friends that proved untrue,
But never forget to remember,
Those that have stuck to you.

Always remember to forget,
The trouble that passed away,
But never forget to remember,
The blessings that come each day.

Always remember to do your duty,
And some kindness day by day,
But never forget to live a useful and happy life,
That is the only way.
Albashir Adam Alhassan

Albashir Alhassan, whose parents are from Niger state was born in Kano state 3 March in the mid 80s.

He has written other poems such as Why do we die and Season of loneliness.

Further research showed that if Trump had not read Alhassan’s poem, it was possible he got his ‘proverb’ from another writer, Victor Borge.

The Irish PM pointed during the visit while standing next to the US President, marking St. Patrick’s day that St. Patrick too was an immigrant – the position of the American president on Immigration is of course no longer classified following the second defeat to his immigration ban at the US Courts.

Irish prime minister Enda Kenny made his annual visit to the White House on St. Patrick’s Day, saying during his remarks that the celebration stems from an immigrant. … “He, too, of course, was an immigrant.”