Lucy Gichuhi filled the South Australian seat in the Senate which was left vacant for over six months after the resignation of Bob Day from the Family First party. 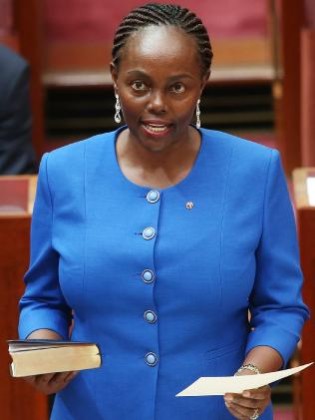 Senator Gichuhi was cordially welcomed by senators from all parties, who shook hands and embraced her after she took the oath.

She then sought leave to make a brief statement on her party allegiance, confirming she would be sitting as an independent.

Earlier, the South Australian spoke of her strong Christian faith and path out of poverty as one of ten children brought up by her devout parents in Kenya in videos posted on her Facebook page

“I am honoured and humbled to be sworn in today as the first-ever person of black African descent in the Australian Parliament.

“I thank God, my husband and daughters, my father and all other friends, family and supporters for your encouragement, and sharing the vision we hold to unite Australia as one,’’ Gichuhi said in a brief message on her Facebook page.

The Kenyan-born lawyer arrived in Australia with her husband and children in 1999 and became an Australian citizen in 2001.

Gichuhi was the second-ranked candidate on the Family First ticket, but will sit in the Senate as an independent after it merged with another party.

Bob Day quit the Senate in 2016 after the collapse of his building empire.

The 54-year-old lawyer and mother of three also posted two new videos on her Facebook page, talking about what she hopes to achieve for the Christian community in her new role.