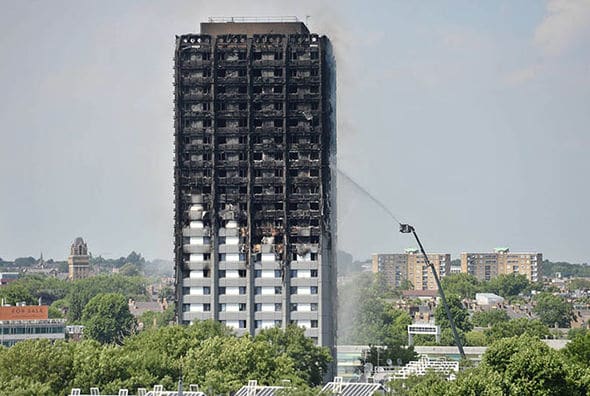 London: Police said on Friday that the fire that engulfed a Grenfell Tower block in London killing at least 79 people started in a Hotpoint “WHR.N” fridge freezer and cladding on the building failed all safety tests.

Police Detective Superintendent Fiona McCormack said the Hotpoint model, “FF175BP”, was not subject to recall and that the manufacturer was doing further tests.

“We now have expert evidence that the fire was not started deliberately,” McCormack said.

Police said both the insulation and tiles used in cladding at the 24-storey Grenfell Tower block failed all post-fire safety tests.

Such were their concerns after the tests that the information was immediately shared with government to disseminate more widely.

“Given the deaths of so many people we are considering manslaughter as well as criminal offences and breaches of legislation and regulations,” McCormack said.

The blaze, Britain’s worst since World War Two, has heaped pressure on Prime Minister Theresa May, already fighting for her political survival after her party lost its parliamentary majority in a snap election on June 8.

When speaking about the 79 people dead, presumed dead or missing, McCormack said: “I fear that there are more.”

NAN reports that May said on Thursday that 600 buildings in England have cladding similar to that used at the Grenfell Tower block.

A spokesperson to May said: “the estimate provided to us by councils is that there are approximately 600 high rise buildings with similar cladding.

“We are obviously in touch with all the local authorities to encourage them to urgently send us the samples and then we will carry out the checks that we need.”

She added that cladding on three buildings has so far tested positive as combustible. The estimate does not include buildings in Scotland, Wales and Northern Ireland.

Flames spread rapidly up the 24-storey residential tower block on June 17, trapping people inside, in what was Britain’s worst blaze since World War Two.

Exterior cladding added during a refurbishment may have played a part, residents have said.

The disaster heaped pressure on Prime Minister May, already fighting for her political survival after a snap election saw her party lose its parliamentary majority. (Reuters/NAN)