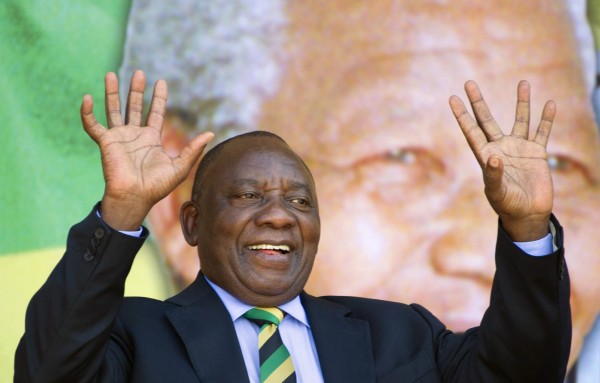 On Wednesday 14th February 2018, Mr Zuma bowed to the inevitable and resigned “with immediate effect”.

Jacob Zuma said during a televised address to the South African nation, “I resign as president of the republic with immediate effect,” he said, “even though I disagree with the decision of the leadership of my organization … I have always been a disciplined member of the organization.” He added: “As I leave, I will continue to serve the people of South Africa as well as the ANC.” 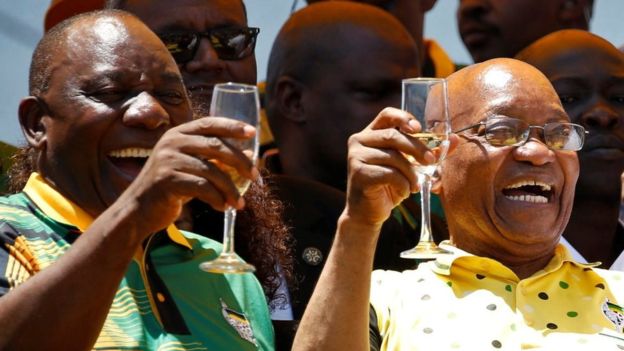 He both served Zuma — tarred by accusations of corruption and incompetence — and also delivered occasional, cautious criticism of his former political master.

Born on 17 November 1952 in Soweto, Ramaphosa became involved with student activism while studying law in the 1970s.

He was arrested in 1974 and spent 11 months in solitary confinement.

After studying, he turned to trade unionism — one of the few legal ways of protesting against the white-minority regime.

When Mandela was released in 1990 after 27 years in prison for opposing apartheid, Ramaphosa was a key part of the task force that led the transition to democracy.

Ramaphosa rose to global prominence as the ANC’s lead negotiator, with his contribution seen as one factor in the success of the talks and the resulting peaceful democratic handover.

Ramaphosa has four children with his second wife Tshepo Motsepe, a doctor.

He was accused in 2017 of having affairs with several young women, which he denied.

Ramaphosa did admit to an extramarital affair but told local media that he had since disclosed the relationship to his wife.

Some saw the sudden revelations as a smear campaign by associates of Zuma who backed another candidate at the crunch party conference — his ex-wife Nkosazana Dlamini-Zuma.

The impact of the scandal was short-lived, and Ramaphosa based his campaign on his pledge to rebuild the country’s economy, boost growth and create much-needed jobs.

If he becomes president by the end of the week as the ANC has indicated is possible, his opportunity to try to transform the country will finally have arrived.

“Ramaphosa has no association with any of the corruption scandals that have plagued South Africa,” wrote his biographer Ray Hartley in “The Man Who Would Be King”.

“But the years he spent at Zuma’s side, playing the ‘inside game’ suggest he is more comfortable as a powerful insider than as a radical reformer.”