Jacob Zuma has quit as President of South Africa, finally succumbing to a slew of corruption scandals that have drained support from his ruling African National Congress party. 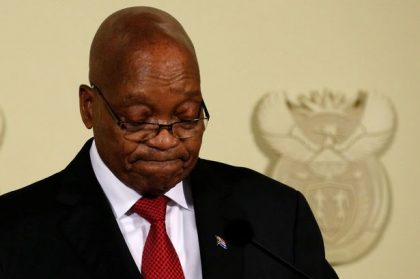 “No life should be lost in my name and also the ANC should never be divided in my name,” he said during a nationally televised political address Wednesday. “I have therefore come to the decision to resign as President of the republic with immediate effect.”
The announcement came after the ANC took the extraordinary step of calling for a no-confidence vote in the leader on Wednesday, a day after it publicly demanded his resignation. Party officials on Tuesday decided to issue a “recall” notice after failing privately to convince Zuma that he should step aside.
After his resignation announcement, Zuma said he disagreed with the decision of his political party and that he has always been a “disciplined member of the ANC.”
“As I leave I will continue to serve the people of South Africa as well as the ANC, the organization I have served all of my life in,” Zuma said.
Zuma, 75, survived multiple attempts by opposition parties to oust him during his more than eight years in power, earning him the nickname of the “Teflon president.”
The leader of the South African opposition party, Mmusi Maimane, said it was about time Zuma resigned and that the former President should see his day in court on corruption charges.
Speaking to CNN immediately after Zuma’s resignation, Maimane said the Democratic Alliance will put forth its own candidate in the national assembly on Thursday and if needed will contest the election of acting President Cyril Ramaphosa.
“It’s about time that some form of accountability is afflicted on Jacob Zuma and I think that he has been a one-man wrecking ball to our economy, to our country,” Maimane said.

Last year, South Africa’s Constitutional Court ordered Zuma to repay millions of dollars in public funds spent on refurbishing his private homestead.
He also faces more than 783 allegations of corruption relating to a 1990s arms deal. Zuma denies all the corruption allegations against him.
The ANC had been trying to push Zuma out for months. It dumped him as party president in December, narrowly electing Ramaphosa, a 65-year-old millionaire former union leader, over Zuma’s preferred successor, his ex-wife and former cabinet minister, Nkosazana Dlamini-Zuma.
Ramaphosa said Sunday that the uncertainty over Zuma’s future had damaged the ANC.
Original source CNN