Minister of Federal Capital Territory, Malam Muhammad Musa Bello has blamed the poor sanitary condition and environmental degradation in the capital city on indiscipline and failure of the society to do the needful.

The Minister stated this while flagging off the final phase of the Households and Community based sanitation exercise at Kurudu, a suburb of Abuja, in the Abuja Municipal Area Council. 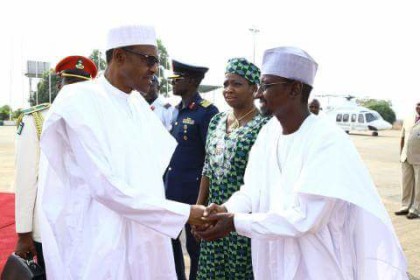 The Minister noted that when the society and other professional institutions in the city carry out their statutory duties diligently, the issue of dirty environment will not arise.

“If the Town Planners and other professionals involved in city planning have done the planning well by providing spaces to dump refuse, the people would have not been dumping refuse by the road side or road dividers”, the Minister emphasised.

He stressed that every aspect of the society has a role to play in keeping the entire environment clean, he therefore called for a holistic change of attitude by the residents as the government cannot clean residents houses.

“Unless we tackle all these and change our attitude, we would continue to flounder in dirty which of course is unacceptable to this Administration.”

“If any Area Council could afford to be dirty then certainly it is not AMAC. The ‘Clean and Green’ exercise is unique in its totality as it carries two messages at once, cleaning and greening,” Malam Bello noted.

He added that the community based approach to environmental sanitation would lead to a more realistic and sustainable effort in maintaining the environment and thus enjoined the Area Council Chairmen, Traditional rulers and leaders of the various communities to organise their communities to work as a team and tackle the issue of refuse littering all over the Territory to ensure a clean and healthy environment.

Earlier, the Minister of Environment, Hajiya Amina Mohammed who was represented by the Director of Special Duties in the Ministry, Engr. Okunnu Otosin Kehinde hailed the collaboration between FCTA and the Federal Ministry of Environment on “Environmental Sanitation”, that would ensure the provision of clean environment for healthy living in the Territory.

The Minister stressed that environment of filths and dirt constitutes so much public health hazards to the people and therefore called for concerted efforts to rid our habitats of dirt.

For his part, the Chairman of the Abuja Municipal Area Council, Mr. Micah Jiba thanked the Minister for introducing the Household and Community Sanitation exercise, saying that it would go a long way in reducing incidences of diseases in the Territory.