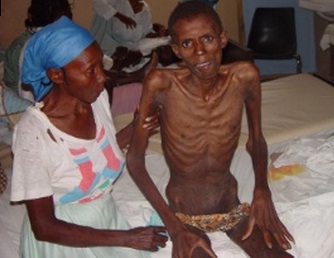 Symptoms of HIV can be dehydration

A British man with HIV undergoing a pioneering treatment to cure him of the disease has shown “remarkable” progress, doctors have told a newspaper.

Scientists treating the 44-year-old patient are now hopeful of a breakthrough in what has been described as “one of the first serious attempts at a full cure for HIV”.

The man, who has remained anonymous, is the first of 50 people to complete a trial using the two-stage attack on the deadly virus.

The research is being carried out by a collaboration of five of Britain’s top universities organised by the National Health Service.

Mark Samuels, managing director of the National Institute for Health Research Office for Clinical Research Infrastructure, told the Sunday Times: “This is one of the first serious attempts at a full cure for HIV. We are exploring the real possibility of curing HIV.

“This is a huge challenge and it’s still early days but the progress has been remarkable.”

The trial patient told the newspaper that recent blood tests showed no detectable HIV virus was present, although it was too early to confirm that the treatment had worked.

The new therapy aims to overcome a major barrier to clearing the virus from a sufferer’s body that has challenged researchers for decades.

Current methods using antiretroviral therapies (Art) fall short of ridding patients of HIV, as the virus can hide out of the drugs’ reach in the immune system’s T-cells.

By sheltering in dormant T-cells the virus can later take over its host and use it to produce thousands of copies of itself, should Art no longer work.

First a vaccine helps the body find infected T-cells. This is then followed by a course of the drug Vorinostat that awakens the dormant T-cells, which then begin producing HIV proteins that act as a homing beacon to the immune system.

Imperial College London consultant physician Professor Sarah Fidler said the treatment worked in the laboratory and there was “good evidence” it will work in patients.

However she added: “We must stress we are still a long way from any actual therapy.”

More research at the WHO.