50 women suffering from Vesico-vaginal Fistula have been given a new lease of life in Kebbi state by having their Fistulae repaired. This repair was made possible by the Extended Hands organization (whose main sponsors are NNPC, Shell and Septco). Extended hands NGO was started by UNFPA Ambassador And Nollywood star Stephanie Linus Okereke.

Working with the Kebbi state Government via the Ministry of Women Affairs and the Wife of the Governor Dr Zainab Bagudu 50 surgical repairs have been carried out.The repair camp which started on 5th March, ends on 12th March 2017 at the VVF Center in Gesse, Birin-Kebbi.

Earlier in the week, His Excellency Senator Atiku Abubakar Bagudu visited the centre during ongoing repairs and immediately ordered all supporting medications and equipment required should be provided by the Ministry of Health. This directive has been complied with.

As is norm, the 50 women repaired during the week were given start up kits that will enable them earn a living after discharge. The presentation was done during a facility tour and closing ceremony on Friday 10th March 2017. Items given include deep freezers, sewing machines, knitting machines, cosmetic kits and grinding machines. All of these were provided by the state government. 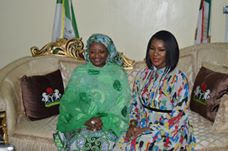 On her own part mother of the nation Her Excellency Haj Aisha Mohammadu Buhari gave solar powered lamps and clothing materials to each patient. She called on parents to stop the practice of Female genital mutilation as this is one of the main causes of VVF. She also urged authorities to look into allegations on rape and molestations particularly in the IDP camps in Nigeria.

At a stakeholder dinner held in her honour on Thursday 9th March, Mrs Stephanie Linus Okereke thanked both teams for the work put in and the continuous support from her sponsors. She promised to work with her partners to upgrade the facilities in the centre. Project Manager of the Extended hands, Chinedu Omorie said the Foundation came back to Kebbi because of the passion they saw during the repair camp last year. Wife of the governor, commisioner of Health and Perm Sec women affairs all commended Extended Hands and asked other NGOs to carry out such philanthropic acts.

Dr Bagudu a Fistula Care Plus VVF champion, announced that the film Dry produced by Stephanie Okereke will be shown to women in the state once Hausa subtitles or voice over is provided.

VVF is a highly distressing and stigmatizing condition which manifests with urine leaking into the vagina without control.

It be a result of prolonged labour and is a reflection of poor maternal and antenatal care. Other related causes are early marriage, malnutrition and genital mutilation.