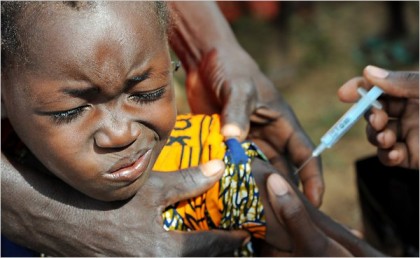 The National Centre for Disease Control in Nigeria (NCDC), says the vaccination for the Type C strain of meningitis will begin on Wednesday, following the procurement of the vaccines from the World Health Organisation (WHO).

The Chief Executive Officer (CEO) and National Coordinator of the NCDC, Dr. Chikwe Ihekweazu stated this on Monday while briefing the Senate committee on primary health care and communicable diseases, on efforts being made to contain the recent epidemic in some states of the country.

Dr. Ihekweazu said the Type C strain of the disease is new to West Africa, hence the seeming unpreparedness to tackle it. He said the vaccine was only procured two weeks ago as the criterion for application is that the affected country must be experiencing an outbreak.

He added that the centre, working in collaboration with the state governments, Ministry of Health, and the National Primary Healthcare Development Agency (NPHCDA), has adopted a three pronged line of action for prevention, early detection and pushing hard to ensure the vaccines are available.

“This disease is associated with overcrowding, particularly in this weather. We cannot tell people not to overcrowd their homes but we urge them to make sure their homes are well ventilated, and to observe good personal hygiene,” he said.

Dr. Ihekweazu who confirmed that the centre has sent support teams to Zamfara state and other affected states for rapid response, including the establishment of treatment centres, also admitted that not much has been done with the 16 states that are not fully affected.

According to him, the 16 states would however be part of the response approach, noting that the centre is hampered by inadequate funding and limited manpower.

The Chairman of the Senate Committee on Primary Healthcare and communicable Diseases, Senator Mao Ohuabunwa, noted that the widespread outbreak may have been averted if relevant agencies had commenced campaigns to raise awareness on preventive measures when it first started in December 2016.

“If this had been detected early, then we would have had rounds of vaccinations and would not be having this epidemic,” he said.

Another member of the committee, Senator Ajayi Boroffice, also blamed lack of sensitisation campaigns for the widespread outbreak.

“Since it showed up in the second week of December, the alert to the public is not good enough, particularly as it is known that affected people come late to hospital. This may be because many people do not know how it presents,” he said.

Meanwhile Senate President, Dr. Bukola Saraki has assured Nigerians that the Senate would provide the necessary support to the Ministry of Health, in the bid to curb and possibly end the outbreak.

Senator Saraki, in a series of tweets on his twitter handle, @BukolaSaraki, stated that he has spoken with the Minister of Health, Professor Isaac Adewole, to assure him of the Senate’s commitment to help end the epidemic.

The tweets read, “I applaud FG’s, Ministry of Health, stakeholders and @WHO’s effort to fight meningitis in Nigeria. We need all hands on deck!”

“I spoke to Minister of Health, Prof. @IsaacFAdewole, on the meningitis outbreak to assure him of @NGRSenate’s support.”

“With a 15% mortality rate, the @NGRSenate stands ready to respond quickly to any requests for emergency assistance for #meningitis.”

The death toll from the cerebrospinal meningitis disease currently ravaging Zamfara, Sokoto, Kebbi, Katsina and Niger states has risen to 328, from 2524 Cases. Sixteen other states have recorded at least one case each of the disease.