Abubakar disclosed this while speaking at a blood donation drive in Abuja on Thursday in commemoration of the World Blood Donor Day. 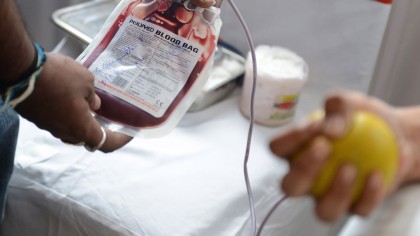 According to him, the risk level of cancer drops in correlation with how often people donate blood.

Quoting the Miller Keystone Blood Centre, he said that consistent blood donation could help in lowering the risk of liver, lung, colon, stomach and throat cancers.

He also said that blood donation could improve the overall cardiovascular health.

“Donating blood regularly helps the males in particular to reduce the amount of iron in their blood, which reduces the chances of a heart attack by 88 per cent.

“The high level of iron in the blood raises the chance of heart disease, but regular donation can reduce the risk of severe cardiovascular veins, such as stroke by 33 per cent,” he said.

The programme manager further said that regular blood donation could improve fitness, explaining that donating one pint of blood (450 ml) takes out 650 calories from the donor’s body.

“When blood is withdrawn, the donor’s body immediately begins to replenish the lost blood within 24 hours of donation.

“All the Red Blood Cells (RBC) the donor loses during donation are completely replaced within one month to two months,” he said.

Regular blood donation, the expert added, could also afford the donor an opportunity to a free health screening and to saving lives.

“By donating blood, many lives are saved and hope is given to many whose situation might otherwise be hopeless.

“It also brings joy to many; you impact not only the patient whose life may depend on your donation, but also all those who depend on that patient,” he said.

Mr Aaron Samson, a security guard, said that he feels super happy donating blood, because he knows it will safe somebody somewhere.

“The most important thing for me is saving a life no matter whose.

“We have only one country and everybody must work hard for a better Nigeria,” he said. (NAN)